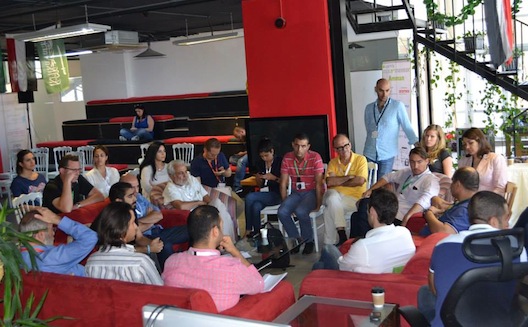 It was a tough decision between the two best submissions from Amman; the other entrant was the team from i3zif, the online Arabic music school whose founders previously participated in a 500 Startups boot camp in Silicon Valley. Here’s the i3zif video:

The Mix N’ Mentor Competition (#MNMCompetition) is the newest feature of Wamda’s flagship mentorship event, announced at MNM Cairo in April. The competition focuses on implementing mentors’ advice given during Mix N’ Mentor, and the lessons entrepreneurs can draw from tackling their startup challenges head-on. Here's more information for people interested in submitting their startup.

Mix N’ Mentor participants are invited to submit a video detailing their startup’s main challenge, what they learned at Mix N’ Mentor, and how they plan on implementing it (including what metrics they’ll use to monitor their progress). Each city’s winner will compete in the finale to win an all-expenses-paid trip to Silicon Valley, where they’ll get a week in a coworking space, and the chance to network on the Google campus.

Having won the Amman level, the RedTroops team will have until December 2014 to submit a final video in which they will feature progress, lessons learned, and how they plan on using their time in Silicon Valley. The RedTroops team will be competing against all other Mix N’ Mentor city finalists.

Each Mix N’ Mentor event will have its own city run, where attendees are invited and encouraged to participate by:

In the next round, RedTroops will face Codly, the winner of the Cairo Mix N’ Mentor Competition, and the winners from the upcoming Beirut and Dubai editions.

Who do you think has a better shot at the trip to the Valley? Let us know in the comments.

Beirut is up next on the 2014 Mix N' Mentor Roadshow. Click here for more information, and to register.