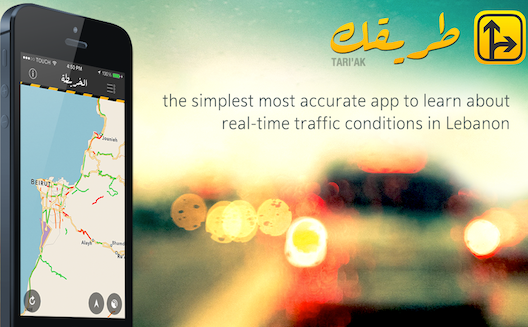 Early this year, Lebanese entrepreneur and iOS developer, Ramy Khawandi launched Tari2ak (‘your route’ in Arabic) a mobile application, to help Beirut drivers stay informed about traffic conditions while they’re out and about.

At this point, any conversation about an app related to traffic in the region might sound very familiar. We’ve witnessed in the past couple years a slew of applications trying to solve this problem faced by millions daily. Some have opted for carpooling, like CairoRollers and Buspooling in Egypt and Waselny in Amman, in addition to a few like Wasalny and Bey2ollak, which compile community-based traffic information that help users navigate roads in Cairo and Alexandria.

As colleague Stephanie d’Arc Taylor wrote early last year, Google itself has enabled live road traffic updates within Google Maps, throughout the UAE, as well as in Jeddah, Saudi Arabia and Kuwait City.

“I’ve been a software hobbyist since my early teens,” says Tari2ak’s Khawandi, who created his first application, an MSN Messenger plugin called Mess Patch, in 2004 when he was just 17. “It was downloaded 10 million times by 2008, but I discontinued it after receiving a cease and desist letter from Microsoft,” he says.

After two-and-a-half years of studying computer science at the American University of Beirut (AUB), Khawandi dropped out to start working at a UK-based software company. Three years later, he decided to finish his degree at the American University of Science and Technology (AUST). There, his senior project – and early version of Tari2ak – won the university’s prize for best senior project.

Tari2ak allows users to learn about real time traffic conditions through crowdsourcing. Further, “when you use the app to get information out, you contribute to it at the same time,” says Khawandi. The young entrepreneur has built an algorithm that retrieves information regarding speed and location of the phone – even while the app is off – while consuming as little power as necessary. Every phone that has the app installed sends feedback to add to the database whenever the phone is in motion.

While other applications might require manual input from users (who may or may not be driving while using it), “Tari2ak is completely road safe, not prone to human error, and works while users are passively driving,” says Khawandi.

Tari2ak offers another service as well: big data analysis on the traffic data gathered. This is important to governments and ministries, for better urban and infrastructure planning, specifically for the Gulf. This, says Khawandi, is Tari2ak’s added value; “we want to capitalize on this.”

Lebanon’s chaotic infrastructure could be a roadblock to Tari2ak’s success. The app relies on the names of the streets to feature the traffic intensity by color coding. But Lebanese don’t always use street names, it might take a little time to get used to it.

But things are looking up. “In Lebanon downloads are doubling almost every month, but we would like to target other countries in the region and we are setting up the technical infrastructure for that,” says Khawandi.

With 1,500 daily active users, and 8,000 active reporters, the app is slowly widening its reach across Lebanon. “The more users we have the more valuable and accurate the app becomes,” explains Khawandi.

The team has not started in-app advertising yet, and is planning on implementing an intermediary business model. “We collect traffic data, give real time traffic for free, but we are working with media companies to sell them data in real time, which can be used by TV stations,” says Khawandi.

Having received official term sheets from several investment offers so far, the Tari2ak team is still negotiating. “We are looking for strategic investors who can help connect us to the Arab world,” says Khawandi.