Cairo and traffic. Whenever you hear the mention of Egypt’s capital you will likely hear some complaint about its traffic shortly thereafter. I

n 2012 the World Bank conducted a Cairo Traffic Congestion Study, finding that annual costs were up to 4 percent of the country’s Gross Domestic Product, about 50 billion Egyptian pounds (US$8 billion). People have, over the years, attempted to tackle the growing throng of cars with various solutions, but still the horns honk and the exhaust spews.

Last summer we covered the river transport alternative Nile Taxi, a project for the resident of areas adjacent to the River Nile. Soon after, Tawseela emerged as a private bus service offering transport for the employees of both international  and local companies for a monthly subscription.

Pie Ride also jumped on the trend, announcing in February 2013 the launch of a similar service for private sector employees and university students at a minimum of three passengers per ride, for either weekly, monthly, or quarterly subscriptions.

Today, the newest addition is Bus Pooling. Equipped with Toyota Hi Ace buses, they hope to bring an end to the transport crisis.

“We offer a public transportation service for employees and students for long distances,” says CEO and founder Mohammed Ihab, “including rides between the outskirts of Muhandisin and the Smart Village; the Smart Village and El Tagamu El Khames. "They’re looking for a minium of seven passengers per ride and a monthly subscription can be bought for 720 EGP (US$100). According to Ihab they have already started with the first rides.

The method sounds familiar: they match up customers who live and work in similar areas and the customize the routes. Check out this video:

Ihab came up with the idea after suffering the stress of getting to work in the Smart Village from his home in the suburbs of Heliopolis. Working in partnership with Mohamed Nawito and Ahmed Sami, Ihab started Bus Pooling in November 2013 while pursuing his MBA at the American University of Cairo (AUC).

Apart from 20,000 EGP (less than US$3,000) from AUC’s incubator V-Lab they have not received any other funding and are now looking to venture capital to be able to scale their service network and buy their own fleet of buses, reduce rental costs, and get their own office space, having relied on co-working spaces until now. Funding would also allow them to start using Facebook as a marketing tool, and distribute flyers throughout various neighborhoods in Cairo.

The Bus Pooling guys believe that their service offers a win-win solution for both the government and car owners facing the crisis. “The average car owner spends 7,000 EGP (US$1,000) a month on gas, oil, and maintenance,” says Ihab. “Our service will save our customers time which they can use to read, reply to emails, or even sleep extra hours, as well as sparing them the effort of being in traffic every day.”

Bus Pooling, though in the early stages, has already garnered a lot of fans.

Their Facebook page is always updated with studies and info graphics that illustrate their vision and so far they have attracted nearly 13,000 fans. They have also proven themselves at competition level with last year’s Giza Startup Weekend, coming second in a competition for innovative concepts; and as finalists for the Social Innovation Employment competition organized by Nahdet El Mahrousa, an NGO that supports innovative young startups. 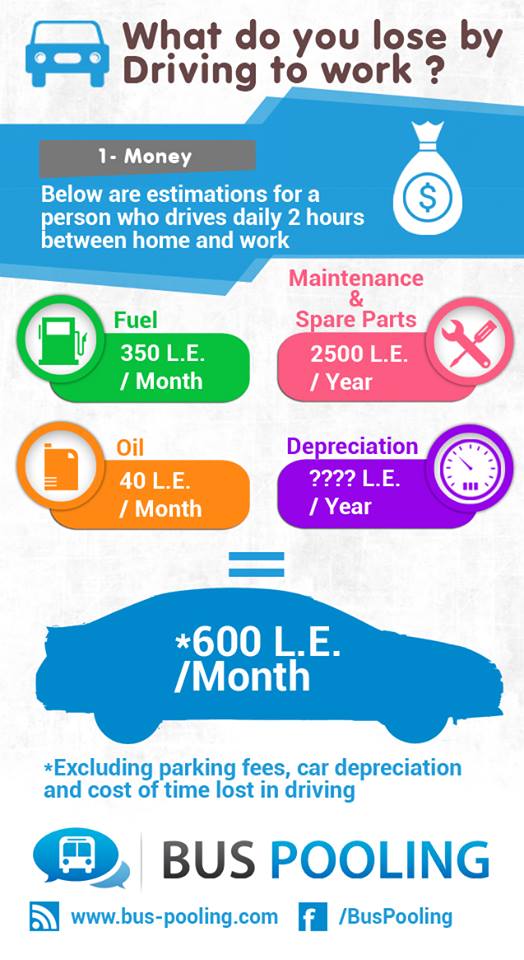 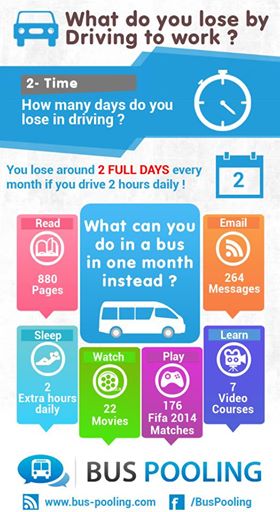 Ihab and his partners believe in the effectiveness of their idea after their studies of local markets. “The partners’ understanding and perseverance in achieving their goal is one of their key success factors. Waiting for the idea to mature before seeking funding is something that all entrepreneurs are advised to do.”

With the Egyptian government admitting that the lack of fast and high quality collective transport is one of the main reasons behind the aggravation of the congestion crisis, can we expect Bus Pooling to make a difference? Watch this space for updates.