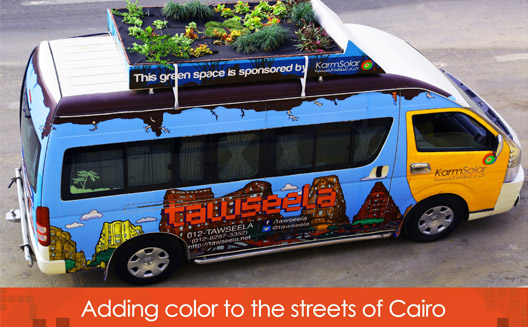 Cairo's traffic has long been one of the city's most intractable problems. Many Egyptian entrepreneurs have tried to address the issue with varying angles. The newly launched "Tawseela" is the latest of these, with a fresh take on the everlasting Cairo traffic dilemma: private bus service.

But Tawseela's vision extends beyond just its vehicles and routes; its team is looking to create something that is relaxing, fun, productive, and enjoyable, "a bright spot in the negative environment of traffic" as described by CEO and founder Tayssir Hawary.

Tawseela was founded in June 2013, and was first introduced to the public on social media on November 3rd. The company has not launched its first route yet. "We are currently asking people to suggest routes and vote for them,” Hawary explains. “Afterwards we will select our first route and will launch on the ground by end of November.”

"Our target clients have no decent alternatives to private cars, and mostly have to struggle through the daily physical and psychological agony that is driving through Cairo traffic," says Hawary, when asked about Tawseela’s target customer. Tawseela is not aimed at those who use local transportation; rather, it targets 23-35 year-old car owners working for big local, regional, or multinational firms, who struggle with Cairo traffic on daily basis.

After graduating from AUC's school of Computer Science in 2005, Hawary founded his own IT company. Then, he joined hands with his friend TJ Quinn in June 2012 to form Tawseela. Quinn passed away earlier this year, before seeing their dream fulfilled.

Hawary found inspiration in his own struggle with Cairo's traffic: "Moving to the 6th of October suburb, and seeing how traffic affects the everyday lives of people [here] inspired me to launch Tawseela," he says. A team of three – a CFO, a logistics manager, and a marketing manager – currently help Hawary run the company.

Many local startups are now looking at the traffic challenge as a business opportunity: entrepreneurs are trying everything from developing traffic-monitoring apps (such as Wasalny), running personal assistance services (such as Mashaweer), and even using the Nile as an alternative transportation route.

Tawseela, however, is different in delivering a business-to-customer land transportation service with high standards. Hawary admits that the competition have their strengths, but he believes in his competitive advantage.

Hawary explains: "We offer accessibility and schedule flexibility, we are cheaper than taxis and car rental. We offer availability throughout city, compared to Nile Taxi, which is limited to Nile-adjacent neighborhoods. And of course, the sense of community and the joy of riding in a happy environment designed for the client’s comfort, over all of the other transportation options."