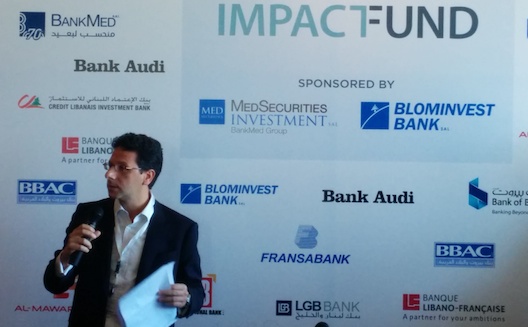 Being the first fund to comply with Banque du Liban Intermediate Circular 331, and with investor commitments in excess of $70 million USD, the IMPACT Fund is the largest non-government sponsored VC firm in the region.

Managing Partner Walid Mansour, says that one of the deal’s main challenges was to convince investors that VC is viable, relying on previous regional success stories to convince them. “We based our argument on the increasing amount of successful exits, and MEVP itself is witnessing some exists this year which we will disclose later on,” he told Wamda during the ceremony.

Even though it was “very difficult to put an independent fund structure within the lebanese rules,” as Mansour says, the fund still managed to pull it off. The IMPACT Fund is co-sponsored by BLOM Invest Bank and MedSecuritiesInvestment, and has already received for its first closing, investment commitments from most of Lebanon’s leading Banks including BLOM Invest Bank, BankMed, Bank Audi, Fransabak, Credit Libanais Investment Bank and Al-Mawarid Bank.

The signing ceremony took place at the Four Seasons Hotel Beirut and MEVP expects several other Banks to join the second closing of the IMPACT Fund, including Banque Libano-Francaise, Bank of Beirut, BBAC, LGB Bank, First National Banks, BML and others.

The whole ecosystem is expecting a lot out of this fund. “We expect this fund to do very well as we are investing in the best businesses this country has to offer and in expats who came back to Lebanon to work on these businesses, and grow their teams out of here,” says Mansour.

To date, IMPACT Fund’s Investment Committee has approved five investments worth $12.5 million USD in aggregate, four of which have been finalized, with one expected to close by the end of 2014. These five investments are:

For the businesses benefiting from the IMPACT Fund, MEVP is adopting the same approach they have been following in their previous portfolio companies. They take a board seat at each and help them manage their growth, strategic planning, and follow on funding.

But when it comes to dealing with the other banks involved MEVP is following a General Partner Limited Partner (GPLP) structure, which is followed by funds globally, so it separates the investor from the manager. “Here the investor is a silent limited partner, they don’t manage the investment nor the investment process,” explains Mansour.

MEVP launched the IMPACT Fund in December 2013 and they received in July 2014 BDL’s approval as compliant with Intermediate Circular 331. The Fund will invest $500k to $5m USD in next generation knowledge based Lebanese SAL companies that focus on the ICT sector, and other creative intellectual property driven sectors, and that are expected to grow into regional and even global success stories.

Therefore, the fund’s potential investments should have target markets covering at least the MENA region, if not the global market, while still maintaining core R&D, and back office capabilities in Lebanon.

“When you have structured smart capital executed properly, you have good investment opportunities,” said Mansour.