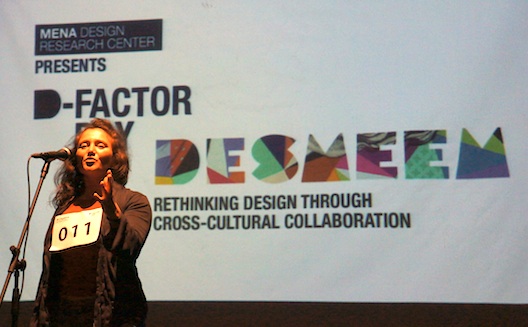 Desmeem’s “D-Factor” Day witnessed scores of Lebanese designers of all stripes trying out at the Babel Theater stage this past weekend for a chance to partake in a cross-cultural competition examining the “design thinking process" in the Middle East.

The Desmeem initiative, launched by the MENA Design Research Center and named for a combination of “design” and “tasmeem” (“design” in Arabic), will create 10 teams of designers. Each team, composed of 3 Lebanese designers and 1 European designer, that will partner with local NGOs for three months to think up creative solutions to issues that the organizations face.

At the event, which was open to applications from the public at large, around three dozen or so Lebanese selected finalists from diverse backgrounds walked up to the stage, one-by-one, with call number pinned to shirt. All were given one minute to communicate their design philosophies and interests to the judges through a hypothetical award speech that is supposed to occur 20 years in the future.

The competition itself was a design experiment of its own, as speakers were given ample room to be playful with their storytelling and performance.

Candidates came to the stage armed with a passion for diverse topics that lend themselves to design, whether it was increasing quality of life in Beirut through the use of green spaces, rethinking the rigidity of traditional school systems, or powering hospitals with the energy of a rock concert. As they dreamt up solutions, most candidates invoked the challenges of living in Lebanese society or urban Beirut. Others, however, surprises the crowd by simply doing a little dance and walking off the stage to humored applause.

Ultimately, the candidates addressed longstanding problems by thinking outside of the box, drawing on equal measures of analytical thinking and intuition to tackle deep rooted and systematic issues at the core of daily existence. It was no surprise to see that one candidate has already managed to get a sizable group of taxi drivers in Beirut to install GPS reservation systems. This project solves, among other things, the much-despised practice of taxis honking aimlessly at pedestrians as they search for extra business.

Nancy Fata was one invited candidate who hopes to fulfill her desire to completely re-think many aspects of traditional schooling. Curiosity drove me to ask her why she would be interested in a field which is seemingly unrelated to her career in interior design.

“If it wasn’t the rigidity of my learning program that dumbed me down, then it was supposed role models within the school system who tried to convince me that I was dumb,” she related after the event.

Having taken some coursework in design thinking principles late in her career, Nancy came to understand the shortcoming of schools that fail to address the diversity of human intelligences and their applications within the real world. “What is needed is a kind of school that can base its learning on real-world scenarios and student-centered techniques that do a better job of engaging and challenging students to learn in a way that sticks,” explains Nancy.

Certainly design is meant to address problems, and in Lebanon there is clearly no lack of longstanding challenges to inspire future rounds of candidate designers to contribute to the DESMEEM initiative.

The goal is simply to promote multidisciplinary design and design thinking, says founder Doreen Toutikian. By connecting designers to NGOs, “the idea is to get pragmatic solutions out there,” she says. “We want to combine architects, industrial designers, web designers, product designers, and social designers as well as design researchers.”

At the end of the three month multicultural design initiative, Desmeem will host a week-long series of workshops and lectures, both to encourage more exchange between design schools in Europe and the Middle East region, and to encourage designers to get interested in the public sector.

Toutikian’s vision of cross-cultural design collaboration is based on her own experience of growing up in Beirut, attending Notre Dame University in Lebanon, continuing on to get a Master’s in European Design at the Köln International School of Design in Germany (KISD), and also working for a year in product and service design at the Glasglow School of Art in Scotland.

Connecting European and Middle East culture simply leads to more innovation as it incorporates different ways of thinking, she says. “The Germans always take things step-by-step. Designers from our region sometimes jump to a solution and skip several steps, and the Germans are surprised.” Yet both perspectives add value to the other, she points out.

After winning the Cologne Design Prize in 2010 for her book Design Education in the Middle East, Toutikian resolved to further encourage designers in the Middle East to examine what is unique about design in the region.

“If you import things from abroad, you aren't taking cultural needs into account. How can we extract from our culture it what becomes an advantage to us in terms of teaching design? How can we translate our culture into our design education? How can we get designers to know what is special about them being Middle Eastern?” Toutikian asks.

Desmeem will continue to address those questions, as it launches its Official Kick Off on March 31st of March at Nasawiya in Mar Mikhael.

Said Hamideh is a guest writer and Palestinian-American entrepreneur, keenly passionate about the future of academic learning within social media platforms. You can find him on Twitter at @saidhamideh.