It’s been three years since we launched Nakhweh (@nakhweh) to match volunteers in Jordan with local opportunities. As it evolved into what it is now, one of the most complicated struggles we’ve gone through has been trying to bring NGOs online to post their volunteering opportunities on our site. To do so, we started urging them to highlight their work and offer an alternative narrative in light of the general violence and strife in the media climate lately.

Now, three years later, it’s a different story; Jordanian nonprofits have begun welcoming the virtual world and some role models have even become leading examples of how social media can be used for social good.

With the impressive number of social activists and social entrepreneurs cropping up all over the region, social media has became critical for spreading the word about your business, building partnerships, and rallying different kinds of support and advocate for different causes. It's actually becoming one of the very first steps in kicking off a social initiative. 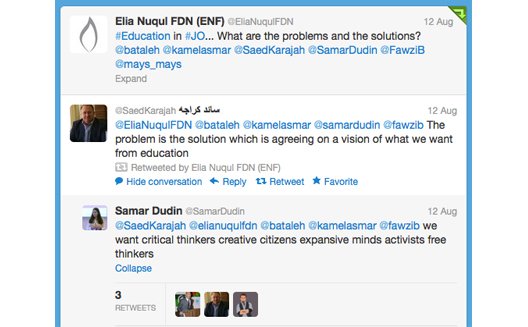 In Jordan, a few NGOs stand out as excellent examples of how to use social media effectively:

It’s evident from these examples that social media is not simply an alternative for NGOs, initiatives and social entrepreneurs anymore; it's the most inclusive and affordable way to reach out to beneficiaries, supporters and partners.

Now the biggest question is: how far are we from actually fundraising online? This issue is related to general fundraising dilemmas for startups in the region and especially in Jordan, and it’s complicated as well; current law doesn't allow foreign money to get to Jordanian NGOs easily. Yet at Nakhweh, in Jordan, we have noticed that, while offline fundraising works well, many donors have requested an online channel for donation. Hopefully, as organizations like Under My Olive Tree take online donation regional, we’ll see social media becoming a platform for fundraising.