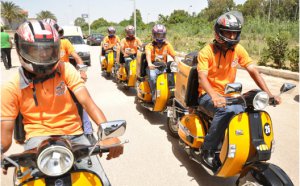 Should you happen to get stuck in traffic and not be able to pull off some chores during a hard working day, don’t hesitate to rely on your private agent to do all those “mashaweer”, all those trips for you. Mashaweer, which operates 24 hours a day, 7 days a week, is the first startup in Egypt dedicated to saving you time and wasted effort on everyday routine tasks.

Like UAE service Allinque, Mashaweer offers a vast array of services, from grocery shopping to ticketing, from telephone, electricity and water bill payment, to renewal of official documents, or even waiting in line for a patient at a clinic, and why not taking pets out for a walk.

Founder Mohammad Waheed came up with the idea in 2009, as he was overwhelmed with his wedding preparations and wanted to hire somebody to handle them. Once he decided to actually develop a business from the concept, he called on his friends Ahmad Kurdi and Ali Al-Shizli, who pooled together 3 motorbikes and 30,000 EGP (US $4800). Today, Mashaweer covers all of Alexandria with 30 motorbikes and 5 cars.

Each Mashaweer agent is called a pilot and each has his own personal smartphone. Once customers dial the service center at 19988, pilots are notified of a task, and then in turn notify customers of accomplished tasks by updating the information on the demand form with relevant details. Cost is set according to distance and means of transportation (motorbike or car). The aim is to charge a lower fee than that of a taxi fare for the same trip.

You may question customer responsiveness with such a service, knowing that our culture in Egypt relies on a do-it-yourself principle. “In the beginning we had doubts as to whether it would work, especially with regards to official trips for passport, identity cards or driver’s license renewals," says Ahmad Sherif Ali, Masahweer partner and customer service department manager. "However, customers themselves encouraged us.”

Despite everything, it was still difficult for a startup to take on official trips dealing with governmental entities, even when securing the necssary official authorization from the government. The process and final decision remains in the hands of government employees, and the latter’s mood for facilitation or hindrance, since practical procedures are not wholly transparent. "In this case, we often count on employees we’ve previously had contact with in order to get required procedures done,” Al-Shizli adds.

From Alexandria to Cairo

After tackling Alexandria, the company then turned its focus to Alexandria, Ali reveals. “After building up to 33 partners and EGP 12.5 million (~US $2 million) in revenue, we decided to target Cairo’s market." The company started operating in the capital in December 2011, right before the revolution. "But it was financially good timing for us," says Ali, "since bicycle prices plummeted.” Now, the company is very close to turning a profit, he reveals.

Cairo has certainly been a challenge, due to the endless traffic congestion. So how did the startup prove its skills and competence to customers and guarantee they could complete tasks on time?

Using a lot of bicycles (an acknowledged potential broader solution to Cairo's traffic troubles) and being creative with transport turned out to be the biggest factor. Today, in Cairo, Mashaweer not only uses 130 bicycles and 5 cars to cover the capital, but also recently added to its vehicle fleet a speed boat. Why not a plane in the future?

Mashaweer’s work is seasonal at times, in that orders peak during exam periods. Yet it gets its lion’s share from corporate individuals and institutions, which account for up to 55% of the startup’s total trips. Its primary customers are Egypt’s most famous e-commerce companies, including Dare’n’Deal, Offerna, Souq.com and edfa3ly.com; some rely entirely on  Mashaweer for service and coupon delivery.

These connecions continue to help Mashaweer market its name to customers. It's now grown to 350 employees serving 25,000 customers over 300 services daily, with 80 companies using its services, 90% of which are located in Cairo.

Following Cairo, Alexandria and the Northern Coast (where Masahaweer does business mostly during the summer), partners have an eye on Red Sea cities such as Sharm Sheikh, Ghardaqa and Gouna. Mashaweer opened its first branch outside Egypt last month in Lebanon under the title “We do it for you.” Another branch will open its doors in Dubai early next year, making the startup officially regional.

The startup may have been inspired by Cairo's traffic congestion, but a city like Dubai is likely to utilize the service for prestige and luxury, say the founders. They may have to adapt their services to suit a new customer profile; those from higher socio-economic brackets tends to order services more on a whim, like bringing a certain type of ice cream from Cairo to Alexandria, says Mashaweer's customer service department manager, while lower social ranking individuals tend to tasks more urgent and necessary tasks, like diploma certification.

Back in Cairo right now, the biggest challenge facing Mashaweer now is getting to the right place at the right time, which is not an easy task, considering both the traffic and now the tension prevailing in areas where demonstrations take place. The startup refuses to send its agents to violence-prone locations, Tahrir Square being one of them.