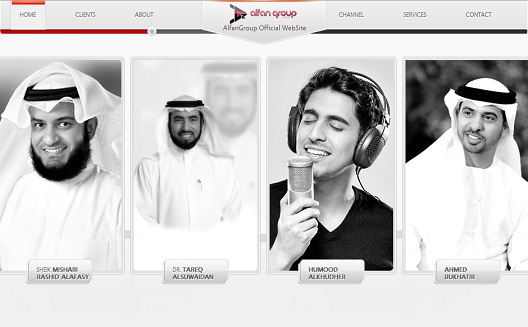 Today, viral YouTube videos propel artists to fame overnight, creating a completely new set of rules for music promotion. This is where the Alfan Group comes in.

In 2011, Syrian-Canadian Mohammad Fattal was experimenting with YouTube video advertising, when he found that he could make even the most elementary videos explode in popularity.

“I was experimenting with YouTube and online content,” he says. “I took a video of someone doing a backflip and I put it on my channel and, with some tweaks here and there, I was able to get on the YouTube homepage and was able to get 50,000 views in one day.”

He decided to turn his talents to promote and manage his own YouTube account into a business focused on artists in the Arab world.

By helping a local singer in Saudi Arabia with his YouTube channel, Fattal was able to make a little money through ads. With this tiny success, Fattal got in contact with Syrian singer Yahya Hawwa and signed a contract to manage his YouTube channel for the next two years. He slowly expanded his client base to today include Sheik Mishari Rashid Alafasy, Humood Alkhuder, and Al Resalah TV.

After launching in March 2011 in Canada, the Alfan Group now has over 20 artists, television channels, and public figures as clientele from Kuwait, Saudi Arabia, Jordan, Syria and other countries in the region. The company owns the rights to all of the content these artists produce on YouTube; Alfan’s channel just exceeded 60 million views on YouTube. The team also manages the social media for each artist, part of the package deal when signing with Alfan.

Taking cues from VEVO, the popular music video site in the US, Alfan seeks to capitalize on the Middle East and North African market with a focus on Arabic and Islamic content. Where VEVO signs with recording labels, Alfan signs directly with each artist to offer them a personal touch.

Although the startup is based in Canada, Alfan has operations managers in Jordan and Egypt to manage client relationships in person. Fattal travels to the region a few times a year to meet with clients as well. Alfan has seven members on its team, though Fattal is the only one working on the project full time.

To monetize, Alfan originally charged a monthly fee of $300 to artists for their services, but has since moved away from this strategy in favor of a 50:50 split of YouTube ad revenues. They are making a profit, after sharing revenues, most clients make a good deal more than they would with their own YouTube strategy.

Alfan’s channels see viewers from across the region, a large portion (44%) from Saudi Arabia, with Morocco, Egypt, and the UAE next in that order. In 2011, Fattal started noticing other entertainment companies approaching his clients, but Alfan has been able to hold on to their clients so far.

They are working now to pivot from operating purely on YouTube to offering more encompassing services, including recruiting sponsors and handling music marketing. "Instead of becoming a channel management company, we’re going to become an online platform for entertainment,” says Fattal. They will prepare an individual artist’s channel as before, but will now allow artists to upload their own content, focusing less on managing the channel and more on marketing and promotion.

Fattal has high hopes for the new year as he hopes to expand his platform to reach 50 artist channels and expand the team as well. When asked what he would do if VEVO decided to enter the region in the near future, Fattal doesn't flinch. “I think we would try to compete, because we have such a strong base right now and we have a good amount of artists signed with us. We offer the same services, but with more freedom for our artists.”

If VEVO does decide to break into the Arab world, Alfan will have a leg up as a first mover, but most likely its competition will come from within the region. In this market, success will all come down to a personal touch and great offerings.