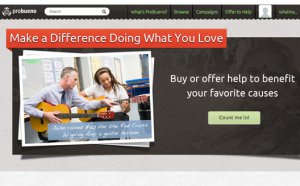 Back in 2006, when the "July war" started in Lebanon, Michel Rbeiz experienced the frustration of living abroad and trying to help out family members and communities in Lebanon.

Based in Boston, Rbeiz really wanted to help communities back home, but simply didn't have an organized platform for donating or helping organized causes.

The idea for building such a platform percolated in the back of his mind, finally leading him to quit his job at McKinsey last year and co-found ProBueno, a platform that offers "charity through services."

With a name inspired by the Latin phrase for "for free" and the Spanish word for "good," ProBueno encourages people to donate their own services online, and then give the proceeds to charity.

The idea can be likened to "the bake sale tradition that we had in schools growing up," says Rbeiz. There, moms would bake cakes to be sold among students and the proceeds would be given to charity.

With the tagline "Make a Difference Doing What You Love," the site encourages anyone to think of what they are good at or like doing the most, and then list it as a service they would offer for free. Lesson seekers can search for various services and pay a fee for those services.

The idea to focus on small services occurred to Rbeiz when he noticed that he is often asked for small favors, and realized that people nowadays would enjoy paying someone they know will give the proceeds to charity.

"Make a difference doing what you love"

For Rbeiz, who graduated from MIT in Computer Science and had been working in consulting, it was a risky step. "Leaving a job and launching a startup is very risky, but my decision comes from trying to put a dent at the universe," he says.

Based at the Cambridge Innovation Center, ProBueno is trying to change the donation scene and create a third way to offer volunteering services, that would be more personal than just writing a check, and easier logistically than volunteering on the ground.

"This third way would definitely not replace volunteering on the ground, but is trying to fill the white space between people who want to help but can't, and those who can actually afford to take six hours from their time and volunteer," says Rbeiz.

Thus far, the statup is not monetizing, but will do so soon, taking a commission from donations in order to make itself sustainable.

"Our goal is to ultimately get a million people to offer something 'ProBueno'. If a year from now we have a hundred thousand people offering something, ProBueno we would be in excellent shape", says Rbeiz, discussing how high the team has the bar set.

Right now, the platform is currently only supporting charities based in the U.S., because it can more easily assess their legal structure and legitimacy, yet payments can come from anywhere in the world.

In general, it sounds like a model that could be easily replicated in the Arab region, partly because most of the services on ProBueno today are oriented towards digital, and partly because, in the aftermath of the Arab uprisings, social initiatives are on the rise in the Arab world.

As citizens launch initiatives like Mante2ty, to revive local neighborhoods, and Ma7attat, to make contemporary art accessible part of everyday life, it's clear that there's a desire to give back and work towards more sustainable projects.

Also, Khan Academy's partnership with ProBueno demonstrates that the education-focused organization is willing to support charity platforms like this, and would probably be open to partnering with those implementing the same model in the Middle East.

It's especially relevant in a post-conflict environment, as one of its biggest benefits of is that it allows those who don't have money to donate. "I believe every person wants to do good by nature, and hopefully ProBueno will give this opportunity to persons who do not have the financial capacity to donate money, nor the logistical flexibility to volunteer on the ground," says Rbeiz.