To me, Chile is not just a country located in South America; it’s also one of the biggest startups in the world. The Chilean government has done something completely new, turning Chile into a startup hub for Latin America through their newest initiative Start-Up Chile. Famously, they focus on the idea of kick-starting their ecosystem by creating just one $1 billion company (a controversial idea that I've written about before). Check out this video to get a better idea of their mission:

I’m simply in love with the project, it actually inspired me to create StartupQ8. And when I found out that the director of Start-Up Chile, Horacio Melo, was with us in Dubai for the Global Entrepreneurship Summit late last year, I just couldn’t pass up meeting and interviewing him. There is a lot to learn from the Chilean experience, especially on how to transform whole countries or cities into startup hubs. Here is our interview: 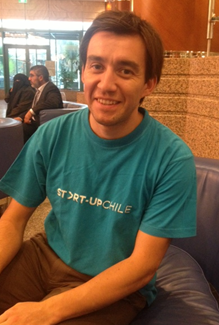 1) What was your background before joining Start-Up Chile?

I had a marketing background working with Proctor & Gamble in Chile where my job was to create innovative marketing campaigns; it was like being an entrepreneur inside a big company. After that, I joined Start-Up Chile in April 2011.

2) What exactly is Start-Up Chile and how does it work?

Start-Up Chile is a 6-month startup accelerator program targeted to both global and local startups. We provide a number of selected early-stage startups US$40,000 for free (no equity at all). Our only condition is for startups to spend these six months inside Chile. After these six months they can do whatever they want.

3) How did Start-Up Chile get started?

The government’s Innovation and Entrepreneurship Advsior, Nicolas Shea, had the idea to launch Start-Up Chile to cause a culture shift in Chile and push entrepreneurs to start more startups that can scale globally. He explained his idea to one of the Ministers in the government and it was approved and implemented almost immediately.

4) Can you share with us some numbers that describe Start-Up Chile’s reach?

We established Start-Up Chile around 2 years ago. During this period we accomplished a lot of things:

5) The goal of Start-Up Chile is so simple: “Create a $1 billion company.” Why have you set this goal? And how will reaching it help Chile?

To create a cultural shift (in terms of innovation and entrepreneurship), we need a great success story. People need to believe that creating something valuable and important for the whole world is possible, even if you are from a small country like Chile. To make them believe in this dream, we just need one success story. Once that billion-dollar company is built, we believe the wheel will start moving and we will see more and more successful startups.

This simple goal helped us to pick startups and focus our resources to help them have a better chance at making big changes not only in Chile, but also around the world.

6) Some people say that your model is too risky, you give startups money for six months then they can leave without restrictions. Why are doing it this way and do you try to encourage them to stay?

We believe that people know what is better for them and for their startup than we do. If they think that leaving for another location is better for them, then we can’t stop them from doing that. We are getting startups and talents from all over the world that are coming to work shoulder-to-shoulder with Chilean entrepreneurs. It’s about learning from each other, creating a global network, and benefiting from a diversity of backgrounds and ideas.

7) Do you suffer from a lack of VC funding in Chile?

Yes, there is a lack for money for funding rounds between US $100,000 – US $1  million. However, we are trying to solve this problem by doing roadshows in Silicon Valley, New York and Miami.

8) Can you share with us some of the successful startups that have been a part of Start-Up Chile?

We have around 10 startups that raised more than US $1M. Some of our most recognizable startups are: cruisewise.com, babelverse.com and Wehostels.com

9) When does the next stage open for applicants?

The application process opens on the 11th of March and anyone from any country can apply to Start-Up Chile. We focus on three main things: 1) the team and their background, 2) the project, 3) the network they bring.  And it’s always a plus to have a mentor or an advisor for your team.

To learn more about the Chilean experience, check out my slideshare report here: “Let’s learn from Chile”.