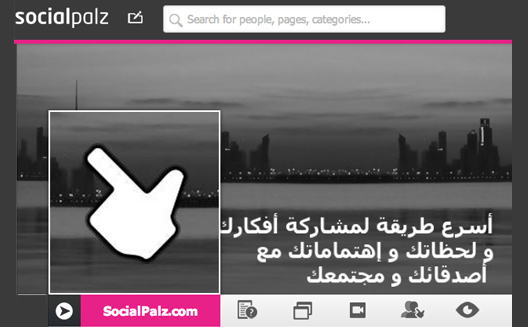 Could the Arab world's next social network come from... Yemen?

Why invent the wheel, the cofounders argue. “We created a design very similar to Facebook, to keep the users comfortable instead of presenting something totally new, but we are at the same time working on a new design with a new concept conveying our own way of displaying text and photos,” Alfagieh explains. And to make it even easier, you can sign up through Facebook.

Other similar tweaks follow; the word “Like” is replaced by “Admire,” and the word "friend" is replaced by "pal."That's what the founders of SocialPalz.com are hoping. Their site, which launched a month ago, is clearly directly inspired by the world's most popular social network; users can share ideas, interests and events from their social life, which are displayed in a Newsfeed-style page.

Even the profile pages look exactly like Facebook, but with a few amusing twists. Facebook's trademark “Like” is replaced by a hand sign with the thumb and the index both up. College graduates Saeed Alfagieh and Maher Al Rahoumi, who co-founded the site, explain that this sign means “correct.” It was used “to differentiate ourselves from the Facebook Like button," Alfagieh confirms.

The first is a categories section, where all posts are categorized according to selected topics. While Facebook's Graph Search allows users to conduct very advanced searches to find information, so advanced that it's been called "scary good." But for Yemen's audience, which is just coming online, the founders reason, clickable categories like Sports, News, Politics, Economy, Technology, and Entrepreneurship are easier to use. In a sense, they bridge the gap from old-school discussion forum to social network. Hopefully, Alfagieh will later work on updating the platform to keep up with how savvy the community becomes.

The second feature is a job posting board, which users can reach by selecting the "Jobs" category, which filters their newsfeed to reveal potential jobs posted by other users. This is very important to Yemeni youth, as unemployment rates are high in the country, and across the region.

“We want to build a different ecosystem that resembles more our Arabic culture,” Alfagieh explains. Facebook and Twitter have a “boring routine and a random way of presenting information, in addition to weak Arabic interfaces.” The categories sections and Arabic interface are designed to solve those problems.

The co-founders are ceratinly ambitious about the project, hoping to own the Yemeni social network space, and then compete with Facebook on a regional scale in the near future.

It might sound overly ambitious for a thinly-veiled Facebook clone run by a team of ten employees. But here's why they might just have a chance:

Users are flocking to the platform. In the month since its launch, the site gained 15,000 registered users, 6,000 of whom are active, posting a total of 500 posts per day, says Alfagieh.

Users are steadily coming online in Yemen, but not joining Facebook. Internet penetration in Yemen has jumped from 1.8% in 2010 to 14.9% in 2012, despite an unstable political and economical situation in the country over the past few years. This means that a total of around 3.7 million people are online in Yemen, which is more than Jordan (2.5 million), Lebanon (2.1 million), or Bahrain (960,000). Of those 3.7 million, only 500,000 are on Facebook. Its 2.0% Facebook penetration rate is over 15 times lower than the average across the Arab world.

It's not the first time a localized social network has beat out Facebook. Several other local social networks that were able to offer customized local features have witnessed regional success, such as Millat Facebook, a Muslim social networking site that originally launched in Pakistan during a Facebook ban in 2011, and gained over 476,000 members quickly.

Another example is Faye3, a Jordanian social network that reached 1 million active users in 18 months before it sold to Maktoob in 2008. Maktoob itself, which is far more than a social network, had around 55 million users in 2011, as compared to Facebook's 23 million users as of December 2012. Hyves.nl, in the Netherlands, which boasted over 10 million accounts in 2010, two-thirds of the population of the Netherlands.

However, it's difficult to actually beat Facebook these days.

Millat Facebook's small userbase plummted after Pakistan's Facebook ban ended. Google's Orkut, which was the market leader in Brazil for 7 years, following its launch in 2004, and also in India, until the number of Facebook users surpassed Orkut users in India in 2010, and Brazil in 2011.

Bebo, a social network that rose to popularity in the United Kingdom after its launch in 2005, faltered after its sale to AOL in 2008, and was shut down in 2010 when AOL deemed it no longer competitive with Facebook and Twitter. (But believers die hard; just a week ago, founder Michael Birch bought Bebo back for $1 million and now plans to rebuild it).

Alfagieh and Al Rahoumi are believers as well. For now, they are simply keeping their heads down and focusing on their home market, with plans to expand after launching a new design for SocialPalz.com later this year. “We are not focusing on monetizing for now but on spreading the word first," Alfagieh explains.