After three years of building SearchinMENA.com, Syrian entrepreneur Salim Akil is poised for the big break that will finally allow him to scale the site into the region’s largest B2B marketplaces for small businesses.

With less than a week left to go, SearchinMENA.com is looking to raise $140,000 in investment on equity crowdfunding platform Eureeca, to build an Alibaba for the Arab world. Offering a total of 7.22% in equity, this investment round values the company at US$1.9 million. At time of print, it had raised almost $75,000, just over half of its goal, from 22 investors.

If SearchinMENA.com can secure the rest in the next six days, it will join ranks with Nabbesh and Harir to become the third company in the region to successfully close a series A round of online contributions from angel investors.

It’s an ambitious goal. Both Harir and Nabbesh asked for less, with Nabbesh running a smooth campaign featuring investors that it had spoken to offline. But Akil is nothing if not tenacious. He’s personally wooed every single one of his 22 investors, and survived two relocations to build a database from Dubai.

In theory, the opportunity is enormous. Alibaba, which launched in 1999, has expanded into a group of businesses that handled over $170 billion in sales last year. Its flagship site, Alibaba.com, which took on investment from Yahoo in 2005, now has a rumored valuation of around $100 billion.

Initially, Alibaba.com launched as a B2B portal designed to connect Chinese manufacturers with overseas buyers. Today, it connects importers and exporters from 240 countries, alongside sister site 1688.com, which facilitates B2B trade within China, and AliExpress.com, where small buyers can purchase goods at wholesale prices.

SearchinMENA.com, on the other hand, is focused only on the regional market, combining elements of Alibaba.com and Kompass.com, a global B2B search engine based in Switzerland. With the tagline “New channel to attract clients,” SearchinMENA.com allows regional clients to gain access to a database of local and regional suppliers and service providers. 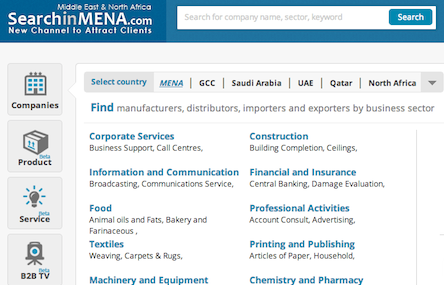 From Aleppo to Dubai

Although the site is based in Dubai today, Akil has experience owning a domestic market. When the idea first launched in Syria in 2010, with the name SearchinSyria.com, the site quickly amassed a database of 3,500 companies- the largest in Syria- which brought global client Kompass calling.

Unfortunately, as many can guess, Akil had to call off a potential deal to launch Kompass Syria when conditions began deteriorating in Aleppo. As electricity and internet blackouts grew, he quickly made the leap to Lebanon, with the help of the Syrian Enterprise and Business Center, along with local incubator Berytech, and mentoring organization Mowgli. Yet Lebanon at the time also seemed like potentially shaky ground. Akil didn’t want to leap from the frying pan only to find himself in another potential fire, he admits.

Akil again quickly relocated to Dubai. After a year of pitching to investors, everywhere from Startup Weekend Dubai to DubaiSME to the 2012 MITEF Arab Business Plan Awards (where he chatted with Wamda about his journey), Akil found a deal that would allow him to set the company up in this new market: $100,000 in investment and nine months of incubation from Dubai Silicon Oasis, a startup support vehicle backed by the Emirati government. With DSO’s support, in exchange for a 35% equity stake, Akil gained a foothold and began building the platform to become a regional player.

From Dubai to the Middle East

The next round of investment on Eureeca- to which DSO has contributed an additional $10,000- will allow the company to focus on Saudi Arabia, where it now has a minority share of clients, reach markets including Egypt, Turkey, Morocco, Kuwait, Lebanon, Algeria, Iraq, and Libya, rebuild its website, launch a marketing campaign, and grow its team to 50 by the end of 2015.

For now, the company is generating revenue by charging sellers yearly subscription fees for premium profiles; in the future, it will expand its premium services for sellers, turn on advertising, and begin selling market information and premium accounts to buyers as well.

Companies on the site generally see a 10-15% conversion rate for the number of leads they generate, Akil says. One client that we contacted, Sally Obeid, the marketing manager of digital agency Yes 2 Digital, said that, the company has secured business leads through the site, as well as receiving applications for employment, through which it has successfully employed new team members.

One investor, 26-year-old Ibrahim Aldasouqi, met Akil through a friend in Dubai and decided to invest based on the opportunity to support someone who’s also “young and full of ideas and energy,” and the fact that SearchinMENA.com is, “doing something like Google,” but from a business perspective. SearchinMENA “minimizes the search scope,” he explains. The $40,000 he contributed on Eureeca is his first investment in an internet startup.

Can SearchinMENA lure investors, businesses, and even a potential partner?

Any site that offers offline businesses an opportunity to connect with new clients should be able to find a market among the vast number of businesses in the region with a limited online presence. By beginning in Dubai, SearchinMENA.com is tackling the one market where businesses might have less need for a new online presence; as the project saw in Syria, it’s even more likely to be able to attract companies in markets like Iraq, Algeria, and Libya, where few suppliers are present online.

While the company only has six more days to raise its total, things are looking up. Alibaba has come knocking, setting a meeting the day that the Eureeca campaign ends. Akil has already shared his vision with the Chinese giant, in hopes that they would consider investment or acquisition. “I’m not sure what they want,” he admits.

He’s certain, however, that SearchinMENA.com will hit their target. “The first 35% is the hardest part of crowd investing. If you reach that, that means you are going to make it to 100%.”