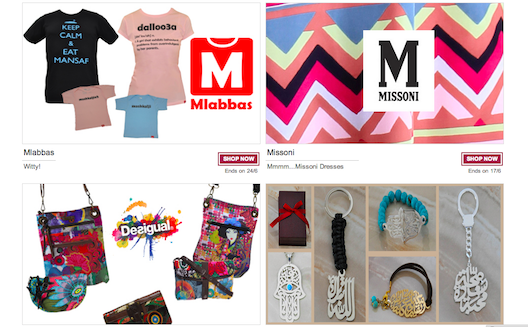 The hour of daily deals may be fading in the Arab world, but flash sales is quick on its heels as the model of the moment.

Since the dawn of flash sales in the Middle East in 2010, MarkaVIP and Sukar have led the sector, localizing the model pioneered by French site Vente-privée in 2004: selling designer clothing online, at large discounts, for a limited time.

Three years on, both sites are still growing; MarkaVIP, for one, claimed to be on track in 2012 to reach US$ 100 million in sales, although, “revenue alone doesn’t make a sustainable business,” COO Sohrab Jahanbani points out. Sukar was acquired by sister company Souq last year, in a bid to boost its expansion by consolidating resources.

In 2013, a second generation of sites are cropping up, mostly targeting the home goods vertical as One King’s Lane has the U.S. Jordan’s Wysada and Dubai’s Desado both launched last December to offer a mix of furniture and design items, and newcomer Harir is carving out a space in the Jordanian fashion market.

By offering a mix of brand name designers (like Juicy Couture and Ralph Lauren) and local Jordanian talent, Harir hopes to lure in customers looking for something unique. That’s what all of the design-focused flash sales sites say, but Harir is the only one to offer quirky local t-shirt companies like the excellent Mlabbas.

The site’s founding story is simple enough: brother and sister team Mousa and Hanae Ayoubi were living abroad when they saw the astronomical rise of flash sales in the U.S. and Europe. After quitting their respective jobs at Ernst and Young and AT Kearney, they returned to Jordan hoping to make a dent as entrepreneurs.

Harir, like any startup, is a work in progress, the founders admit. While 50% of the site’s purchases are local products, it’s still the international brands that lure most buyers in, they confess. However, local brands lower their price points, making the site more in tune with the local market, says Hanae.

By gaining buyers’ trust with good customer experience, the founders hope to boost the popularity of local items. “I see people come in to the site looking at Juicy Couture, and then browse Naqsh (a Jordanian home and fashion accessories designer),” she says.

Since November, the site has gained 8,000 members, with 80% of transactions paid for with cash-on-delivery (COD), 10% via PayPal, and 10% over Moneybookers. As it builds, the Harir team will continue to experiment until they discover what sticks. “We bring design items from abroad, just to mix it up, as well as home accessories,” says Hanae.

“And a bit of electronics,” Mousa chimes in.

Six months after its launch, the company has now made the leap to open shipping in Saudi Arabia.

As any e-commerce company can tell you, that means opening a (necessary) can of worms. With high return rates and a tough local warehousing market, the region’s second-largest market, valued at $520 million, doesn’t come easily.

At Harir, which is fully self-funded, it’s still early days; the company plans to continue fulfilling orders from its warehouse in Jordan, and then bundle returns from Saudi at a local Aramex facility before shipment, to reduce return costs. Once the founders raise a round of investment, they’ll look to warehouse in Dubai or Riyadh.

By closely monitoring customers, they hope to reduce returns, which, have only been 5% of orders in Jordan, they say.

By betting on Saudi rather than setting up in Dubai first, Harir may be the first flash sales e-commerce site to take this route.

Yet the founders are hoping to see larger transactions in the new market, and they staunchly believe that there’s no reason a niche flash sales site won’t succeed, given the model’s success. “It’s one of the hottest sectors in the U.S. and Europe,” says Mousa. "It’s not a matter of when, but of how fast the Arab World will join the rest of the world in buying online," Hanae adds.

And yet, the experiment has just begun. Will Mlabbas lovers really take to online shopping over browsing their new Rainbow Street outlet? Will Saudi buyers take to local Jordanian designers?

And will an offline store make sense one day? Riyadh-based retail concept Velvetty is doing just fine without an e-commerce site, says founder Sinan Khatib. U.S. design site Fab has pivoted away from flash sales and into brick-and-mortar outlets selling home goods. Will an e-commerce site in the Middle East follow suit?