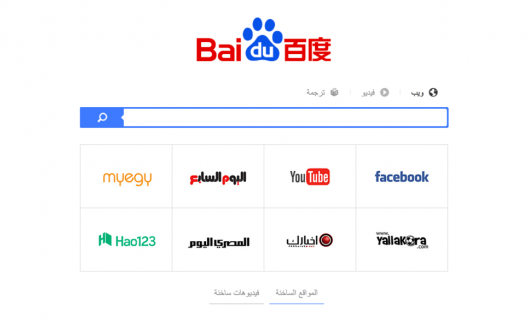 The digital media scene – especially that in the Arab region – seems to be an appealing market for competition between China and the U.S., the two biggest economies in the world. In this context, Chinese company Baidu has launched a search engine in Egypt through which it intends to compete with Google, the American giant.

Baidu is the biggest search engine in both China and Asia, and is the the third-biggest worldwide. Named after a word in an 800 year-old Chinese poem meaning to search for all that is rare, Baidu has chosen Egypt as the first Arab country in which to launch its services, as a testing ground for the region as a whole.

Based on the number of internet users in Egypt, it seems Baidu has made the right decision. Government reports put the figure at 35.9 million people in June 2013, with a growth rate of 15.9% in just a year and a half.

Three years ago, Baidu launched HAO 123, an e-guide for Egyptian websites that has since managed to draw 4.5 million visitors per day, browsing more than 740 million online pages, 80 million pictures, and 10 million multimedia files. Mohammad Dawood, Marketing & Business Development Consultant at Baidu, Inc., announced these figures a few days ago at a press conference held by the company to announce its launch in Egypt.

Dawood also talked about a new partnership program that the company has launched as part of its expansion plans in Egypt. “Baidu’s services are not restricted to individual users but rather extend to include companies through a new developers and advertisements program which offers website owners and content providers a free link or ad on HAO 123,” he said.

Baidu, Dawood said, looks forward to partnering with the most influential players on the digital media scene in order to help improve internet user experience in the region. “The key factors in the development and growth of the internet ecosystem in Egypt consist in holding strong partnerships that [can] offer integrated services in order to achieve mutual benefit. We need to stop thinking as individual companies and start thinking as one single entity, especially in the digital media world,” says Dawood.

Baidu’s oversight of HAO 123’s successful Mother’s Day campaign with e-commerce website Jumia showed the search giant that this integrated approach was the right path to take. “The campaign lasted for 15 days during which we offered daily giveaways for winning customers in addition to 15,000 discount vouchers. The campaign drew more than 50,000 visitors per day, increasing the visits to Jumia during the campaign by 750,000 visits, 60% of which were new visitors, despite the lack of advertising for the campaign on the main page,” said Tariq El Faqi, Marketing Director at Jumia.

Add to that the Holy Quran app developed by the Fatakat forum, included on HAO 123 to satisfy visitors’ religious requirements. The app has achieved more than a million visits in more than one year, according to Dawood.

Aside from HAO 123, Baidu has launched a series of technical services and Android apps in Egypt including Baidu PC Faster, freeware for the protection and acceleration of the computer performance, Du battery optimizer, a free app for the optimization of mobile phones and tablets’ battery life, and Du Player, a free entertainment app that includes a large collection of videos taken from all many website sources, and others.

To implement its expansion plans, Baidu has dedicated $5 million USD to finance its projects in Egypt. The company’s overall worldwide turnover amounts to $31 billion USD.

After Egypt, Baidu plans to penetrate the Saudi market, followed by the U.A.E. in just a few months. “We haven’t invested the entire funding amount in Egypt yet, and we are already present in Saudi Arabia through an HAO 123 e-guide version that includes local websites. We should be soon expanding officially in Saudi Arabia and the U.A.E. through administrative offices and work teams.”

Baidu is striving to become the number one media platform in the world by 2019 and is targeting in the process half of the world’s population.

Will Baidu become the most-visited digital search destination for internet users in the region, overcoming a competitor as strong as Google? Or will the latter find a way to keep the ball in its court?