Last week, Flat6Labs, the largest accelerator in Egypt, announced the graduation of ten startups and their launch into entrepreneurship market. During the ceremony, the accelerator also announced a partnership agreement with Twofour54, the commercial arm of the Media Zone Authority in Abu Dhabi. The partnership aims to launch Flat6Labs Abu Dhabi as a center for startup acceleration.

The move comes in light of the accelerator’s increasing popularity over the past year and its expansion throughout the region, having expanded in Jeddah last year and launched a new bootcamp. “We chose Twofour54 because it’s a governmental entity that is involved in the entrepreneurship sector in Abu Dhabi, which has made a lot of the formalities easier for us. We will be selecting the team and the program’s content ourselves while benefitting from the Emirati company’s facilities,” said Ramez Mohamed, CEO of Flat6Labs.

Mohammed cited the achievements of the accelerator up to this point in figures, saying: “Throughout the past three years, we have graduated 46 startups, created more than 320 job opportunities, and actually launched more than 150 entrepreneurs into the market. We wanted to increase the number of graduating companies in this year’s batch up to ten after it was restricted to only six in the previous batches, thus upgrading the size of our contribution to leading the regional entrepreneurship scene.”

The Flat6Labs team expects the graduation of more than 80 startups in the next four years in all fields. “We are striving to focus on companies involved in digital content, media, press, and social media,” said Mohamed, commenting on the partnership announcement in an interview with Wamda. 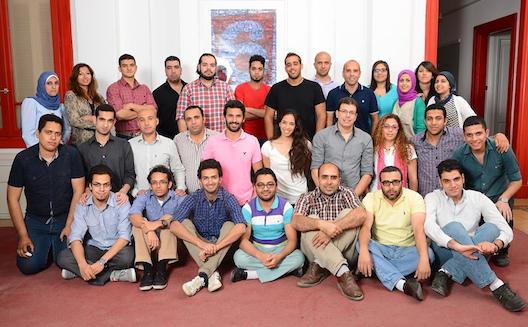 As for the graduation ceremony, all the entrepreneurs agreed on the benefits of the acceleration process. Over the course of the four-month program, entrepreneurs had the opportunity for specialist training in the entrepreneurial sector, as well as to communicate and network with key figures in the investment and mentorship fields. Each also received 100,000 EGP (around $15,000 USD) that they received in funding.

Mohamed Chaaban, CEO and co-founder of Codly feels as though his startup especially benefited from acceleration at Flat6, saying: “I found it to be a true accelerator in every sense of the word. We were able to launch our technical solutions in just three months as a result of the intensive training we received on how to introduce investors to our services, to the point that we are now in the process of studying more than one investment proposal, in addition to [having been] chosen as one of the best ten startups in the region in the seventh edition of the MIT Enterprise Forum Arab Startup Competition 2014, which is a huge achievement for us by all accounts.”

The startups in the Spring 2014 batch work between the industries of technical solutions, food, agriculture, community services, creative design, and fitness: