Since the early days of advertising, the rise of digital has made tracking consumer behavior all over the world easier than ever. The digital ad spend in the MENA region is increasing 37% each year, and is predicted to reach $1 billion USD in 2017. Such a development has led to the establishment of affiliate marketing agencies in the region.

While the developing world lagged behind the West in the early days of advertising, a new crop of digital ad agencies are making sure the MENA is fully caught up this time around.

These include, Ikoo, which secured $3 million USD in investment last year, Istizada, which is targeting foreign companies aiming to build presence in Arabic speaking countries, and most recently, AdHub.

AdHub, which was launched a month and a half ago, is the Middle Eastern exclusive partner of Tradedoubler, one of the top performance marketing networks worldwide. It was founded by Amer Al Halabi and Ahmad Mohanad Zaghloula, and is housed at Dubai’s In5 incubator, which has provided some funding.

According to Yasmine Al-Turk, AdHub’s Partnership Director, performance-based advertising not only enables advertisers to better understand their audience, but it also helps them identify the type of publishers that would get them more conversions. Similarly, it allows publishers to control the ads appearing on their website, which would help them plan for a maximized ad revenue.

AdHub’s platform includes two interfaces, one for the publisher and another for the advertiser. After the publisher creates an account on AdHub.me, they apply to programs presented by advertisers registered to the site. Once selected, the advertiser then approves or disapproves the proposal.

Although affiliate marketing is a risk for both advertisers and publishers, AdHub’s optimized technology minimizes the chance of failure. For example, “if an advertiser places 10 banners on one publisher only, and only three of the banners are actually performing, the technology will automatically only start pushing those three banners and disable the ones that are not performing,” Al-Turk explains.

In its first month, AdHub has managed to get four advertisers including ShopGo (still in the process of registering), and 25 publishers including Arabia.com.

Although AdHub mainly targets travel, retail, and ecommerce companies in the Middle East, Al-Turk states that “affiliate marketing can go for anyone, it’s open for any kind of business.” 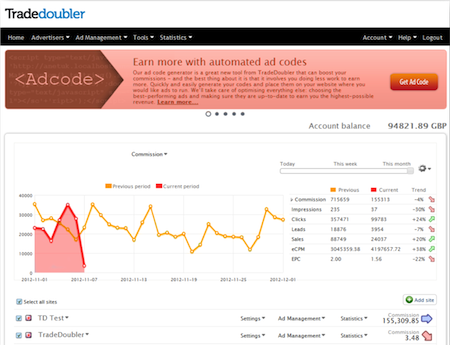 AdHub’s partnership with Tradedoubler, which has been operating for 15 years, has given the startup a distinct support system and distinctive technology, says Al-Turk. “The idea or concept of affiliate marketing has been [in the region] for the last couple of years, but the technology has not been brought to market,” Al-Turk stated, pointing out that AdHub seeks to fill this gap.

For example, “one of AdHub’s advantages is that the platform is developed by Tradedoubler, and since they’ve been around for so long, they have been able to [optimize the user experience], and make AdHub as user friendly as possible,” she says.

Al-Turk also emphasized AdHub’s efforts in educating the region about affiliate marketing and its benefits. Performance-based advertising is still new, she insists, so AdHub has quite a ways to go in terms of educating companies and the public about its merits.

Despite the learning curve, the partner coordinator predicts that affiliate marketing in the region will grow “quicker than most other networks and online platforms... people will be very excited to test it out.”