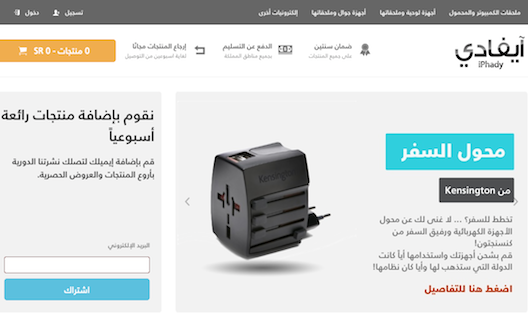 As part of its expansion strategy throughout Saudi Arabia, Alfalak Electronic Equipment and Supplies, a provider of IT and telecom solutions in the Arab world, has recently announced its acquisition of the Saudi e-commerce site, iPhady. The step is a crucial one for the company,  allowing them to concentrate on development plans as well as expand its presence, and further enhance its product portfolio.

Selling Apple supplies and accessories exclusively, the iPhady team consists of qualified technical experts. As a result of the acquisition, the website will include two sections: one for e-commerce, and a second for B2B services, selling products to distributors and dealers.

Taking into account that e-commerce in Saudi Arabia amounts to around 2.1 billion riyals per month, the sector is witnessing an exponential boom. Ahmed Al-Aloula, founder and current CEO of iPhady, hopes the acquisition is the beginning of a profitable and beneficial cooperation.

Al-Aloula did not disclose the value of the deal. He only said that, “it was very profitable for both partners and investors”. On changes that will occur for the company after the deal is closed, he told Wamda that the team will move into Alfalak’s offices in Riyadh, where it will work in Alfalak’s e-commerce department. “I will move from managing iPhady to heading the whole department, managing all of Alfalak’s e-commerce investments,” he said. “As for the name iPhady, it will stay the same. However, changes will occur to the goods, whereby they will be provided in big quantities and will not be limited to Apple’s products and accessories.”

“The decision to sell is no longer up to me”

Now being fully owned by Alfalak Al-Aloula is no longer entitled to make decisions regarding future sales. “The decision to sell the website is up to the board of directors. However, as an e-commerce department manager at Alfalak, I can say that selling iPhady is not in our plans at all. On the contrary, we plan to expand it and to develop sales and generate profits from it.”

According to Al-Aloula plans for expansion include Gulf countries, notably the UAE and Kuwait. “We have started the legal procedures in that regard. Alfalak has offices in most Gulf countries, which would provide us a solid base to launch more easily in these markets.”

A deal such as this is proof that big success for entrepreneurs can take time. First launched at the end of 2011, iPhady was started with the personal savings of Al-Aloula and his partners. Although many stores do sell Apple products Al-Aloula boasts that iPhady focuses only on iPhones and iPads. “This focus grants us a greater knowledge of the market, and a greater ability to provide a wider, and better collection of accessories.” The CEO also felt that it meant they were able to garner a specific insight into the behavior of the devices’ users, allowing them to keep up to date with demand. Valuating the company was the toughest part, says Al-Aloula, who specifies, “Valuating the company and putting a price on it that suits its expansion potentials and accumulated experiences of its team.”

Difficulties that face businesses like iPhady are often related to shipping and distribution. Al-Aloula told Wamda that this used to be the most difficult process, “getting shipping companies to work with a small company.” In the end they collaborated with Aramex. However, they’re now facing another difficulty - the financial cost of maintaining a website that is getting a lot of visits.

Dream big. Al-Aloula told us how he had pitched his site to individuals and companies not as renowned as Alfalak, and there was no interest. He didn’t give up though. “It is still early to talk about plans to establish another company,” he added. “I’m currently most interested in making iPhady and Alfalak’s investments the most successful e-commerce experience the region will ever witness.”