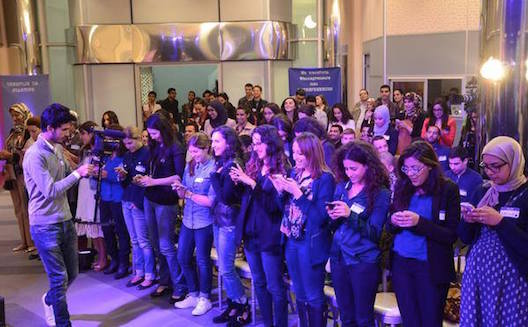 No more “girls just want to have fun,” it’s time to get to work.

For Biaz, the founder of Moroccan coworking space New Work Lab, it all started when she noticed that while half of the people at New Work Lab were women, she still had a hard time finding a woman entrepreneur she could feature during her monthly pitch event, the Pitch Lab. “I couldn’t find them; it drove me mad.”

“[Moroccan] women entrepreneur in the tech industry are not under-represented, they barely exist. Even men are few,” she explains. Moroccans create business but they limit themselves to projects with little risks and little innovation, especially women, she insists.

“A lot of women want to start a company, but when they finally take the leap, they go into consulting. We want to promote innovative entrepreneurship,” she continues. “Tech is an amazing tool that allows us to answer challenges that couldn’t be fixed before. We want [Moroccans] to realize the social and economical role tech can have. We want to see this entrepreneurial tech scene bloom and we want women to be part of it.”

The young woman and five of her friends, all passionate about entrepreneurship, digital, and tech, decided to create the Moroccan chapter to the famous American association Girls In Tech. Launched in 2007 in San Francisco, the association aims to empower women to enhance their professional aspirations. Programs include mentorship, hackathons, conferences, pitch competitions, and trainings.

Each chapter has its specificities. The French chapter, co-created by Mounia Rkha, VC and founder of MyDeal.ma, for example, focuses on showcasing successful women in the tech industry, to bring more women into a male-dominated industry.

“What we need is to showcase women who are doing fine, who are successful, who have had interesting journeys, who young women can relate to and get inspired by. This will show them it’s possible, and will make them want this lifestyle,” she told Wamda in August.

In Morocco, the challenge is not to showcase successful women in tech since they barely exists, but to give women more confidence. “We want to show that it’s possible; we want to create an environment where they can share their challenges,” explains Biaz.

No need to compare men to women, she continues. “Challenges are the same,” she believes. “However women work differently, they have a different approach to management; we need to highlight them in order for them to be more accepted."

If the exact program will only be unveiled at the end of the month, we already know that there will be training programs, events and tools to create a community of women entrepreneurs interested in new technologies.

To create this community, the organizers want women to feel like they’re with friends. “This is why we talk of ‘girls’ and not ‘women’, which sounds more formal. We want to be a group of friends, a collaborative group.”

The launch of GIT Maroc was announced last Tuesday during Pitch Lab Ladies, the women edition of the New Work Lab pitch event that had been merged with GIT’s own pitch event, Lady Pitch Night. According to Biaz, it was a success. “We had almost 500 Facebook likes in a week, and received so many emails and calls. It’s really promising.”