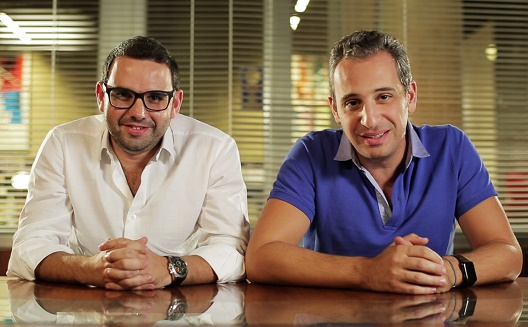 In April 2012, Lebanese entrepreneur Fouad Fattal went on a five-day business trip to the United States, during which he checked his email a few times on his iPhone with data roaming turned on.

When he returned to Beirut, he received a phone bill stating that he had racked up $2,300 in roaming charges.

This turned out to be the fateful experience that would inspire him to cofound his startup Krimston, which recently launched a Kickstarter campaign to raise funds, spread awareness, and get feedback for its dual-SIM iPhone adapter. It’s slated to hit the market in fall 2016 with an expected $199 retail price, and they’ve already secured over $40,000 of their $100,000 goal.

The dual life of an international traveler

Frequent travelers, like Fattal, regularly experience exploitative roaming charges, forcing them to address the issue in different ways - either by owning multiple phones or buying a new SIM card while abroad. These options can be expensive and tedious.

But a dual-SIM phone wasn’t an option for Fattal.

As a diehard Apple fan and iPhone owner (in 2009 he started a company selling Apple accessories in the Middle East) he faced a dilemma: Apple doesn’t make a phone with dual-SIM capabilities. This means iPhone users who need a second line usually have to own multiple phones or manually switch SIM cards frequently. Or, they can occasionally absorb a $2,300 phone bill.

In 2014, Fattal and cofounder Nabil Nasr launched Krimston and began developing a razor-thin gadget that would clip onto the back of an iPhone. It would allow users to insert a second SIM card granting access to a second line complete with separate contacts, messages, and calls.

They then planned to integrate their device with the iPhone via an app.

“We did a bit of [research and development] and realized that in terms of hardware, that we were very close to developing a full-fledged phone,” said Fattal. “Technically, we are a phone without a screen.” 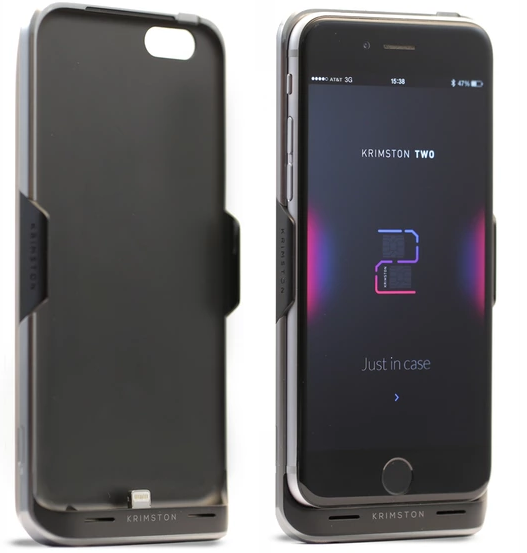 The Krimston Two dual-SIM card sleeve attached to an iPhone.

Fattal and Nasr realized it would be difficult and expensive to develop such a complex product in Lebanon, as the country isn’t known for high-tech manufacturing.

“We needed funds to develop a prototype,” says Fattal. “Because we knew we could not develop something like this out of Lebanon.”

They set about attracting investors to finance the prototype. Fattal said many investors were intrigued by the concept, but were apprehensive about funding an idea without a prototype.

“The majority of these people had two phones in their pockets while we’re talking to them,” he quipped.

But in the winter of 2014 they were at a crossroad, so Fattal and Nasr decided to improvise.

They tore open a Samsung Galaxy Pocket phone and repurposed its hardware. They then 3D-printed a slim case in which they inserted the salvaged parts and developed a basic app to integrate the device with an iPhone.

By March 2015 they had finished the conceptual prototype and returned to investors.

The conceptual prototype netted Krimston enough capital to develop the beta device. It also netted them investors like Ghassan Hasbani, the former CEO of the Saudi Telecom Company, and Nicolas Sehnaoui, Lebanon's former minister of telecommunications, both of whom are now company board members.

But getting their dual-SIM iPhone adapter - now named the Krimston Two - to market presented a new set of challenges.

Fattal and Nasr wanted their device to match Apple’s famously high aesthetic-standards. To achieve this, they worked with industrial design companies in Silicon Valley. But creating the entire device in California was expensive, so the startup delegated some areas of development to a firm in India.

Along the way, they also added a mobile hotspot to the Krimston Two, allowing users to generate Wi-Fi from 3G through the device. It also has its own battery that charges alongside the phone.

Another area of concern was securing Apple’s approval as a licensed ‘Made for iPhone’ (MFI) accessory, requiring them to package delicate hardware in a way that didn’t interfere with the phone’s functionality.

Simultaneously, Fattal wanted to maintain aesthetic integrity, because, as he puts it, when you pay $800 for an iPhone, “it’s so slim and so neat, I don’t want it to end up being ugly and bulky. I want people to know that I have an iPhone.”

Krimston snagged a pre-certification from Apple in July 2015, the first step on the way to being a licensed MFI accessory.

Despite its complex design, the Krimston Two is simple to use. To get started, users download the app, insert a SIM card into a slot on the device, and then turn it on.

The company is targeting markets including the UK, North America, and the Gulf countries, where they’re currently speaking with distributors and retailers ahead of the product’s debut.

Gearing up for launch

The gadget had a test run at the BDL Accelerate startup conference in Beirut in November 2015, at which Krimston tied for first place during the early-stage startup competition.

Encouraged by the positive feedback, the company is now focused solely on getting their product to market. So far in 2016 they’ve finished the beta prototype, netted a $400,000 loan from Lebanese SME lender Kafalat, and began manufacturing.

Fattal and Nasr have come a long way from destroying old smartphones and improvising, but the same spirit of innovation still powers the company as the Krimston Two nears launch.

“Adaptation is key,” says Fattal. “Finding the right balance between the value and the real world can only lead to success.”