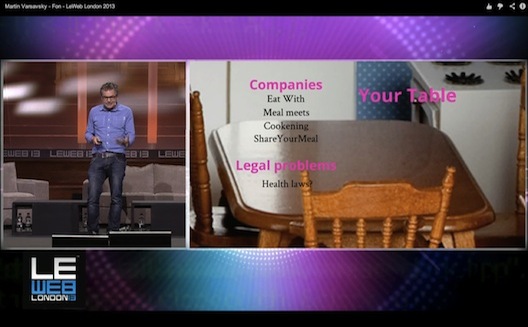 During the 2013 London LeWeb event, some speakers also addressed the limitations of this model:

Martin Varsavsky, founder of Fon, a service that allows users to access millions of WiFi spots for free by sharing part of their own WiFi with others, spoke about the legal problems the sharing economy can encounter.

Milo Yiannopoulos, the founder and editor-in-chief of The Kernel, pointed out 10 reasons "Why the Sharing Economy is Bollocks,” in a charged speech that many in the audience thought was a joke (read the entire speech on TNW).

For Varsasky, legal issues interfere with the sharing economy in moments when you "want to share [things] that we realized are not really yours exactly the way you thought.”

For instance, he illustrates, you can't really share the digital music that you own, because of laws and regulations.

And sometimes, collaborative consumption companies launch before the regulation catch up. One example is the hotel lobby, which is now pushing governments to take action against Airbnb, a service that allows people to rent out their rooms on an individual basis, as they claim Airbnb is unfair competition to them.

Shareyourmeal, Cookening, Eat with Me, and Meal Meets, four platforms that enable people to ask their neighbors to cook them meals or, if they're abroad, to eat at and with locals, also may encounter judicial issues if amateur cooks aren't abiding by the health requirements of the food industry. Platforms that enable Household tasks, like Taskrabbit, might encounter employment tax issues as they’re enabing people to work without a contract. The list goes on (you can listen to it in this video).

The good news is that Varsasky believes everybody could benefit from this new economy, from individuals to big corporations.

The sharing economy is not sharing

Yiannopoulos began his talk by exploding the myth that the sharing economy is either "sharing" or an "economy." In most cases, he points out, it consists not of sharing but of renting goods for a short period.

Contrary to Varsasky, Yiannopoulos believes that “regulation and licensing are there for a reason,“ and that sharing economy services that don’t abide by them are putting themselves and users at risk.

He also reminds the crowd that past attempts to create a sharing economy have, according to him, never been self-sustaining, because they either “never achieve critical mass because the economic incentives for participants weren’t there, or [have] been supported, until their eventual collapse, by the government.”

Yiannopoulos believes the same will happen now, with venture capitalists in the place of government, supplying capital to support startups until their collapse. He went so far as to compare the sharing economy to socialism, saying that the sharing economy deprives its users of privacy. (Yes, that’s when the LeWeb’s crowd started to wonder if he was being serious).

He believes the majority of people is as sharing-averse as he is; he works hard to provide nice things for his family and simply doesn’t want other people to use them. He adds that the sharing economy is “emasculating, dispiriting and demotivating because […] the sharing economy fails to respect how much of our identity we invest into the things we buy.”

A look at legal issues in the Arab world

Where Varsasky is idealistic, Yiannopoulos may be a bit idiosyncratic, and both arguments might break down in the Arab world. On the one hand, startups less likely to be able to lobby their governments for policy changes that will directly enable collaborative consumption, if governments cannot be lobbied for broader freedoms.

Startups in the Arab world also often don't stand a chance of being propped up until they fail. They won't be able to survive from government handouts or an abundance of VC capital; most startups have to bootstrap and struggle to find good VC funding.

Perhaps, in an emerging market, the realities of limited resources will create a sharing economy that lacks the aspiration to be a revolutionary form of exchange, and simply enables functioning, cash-positive startups.