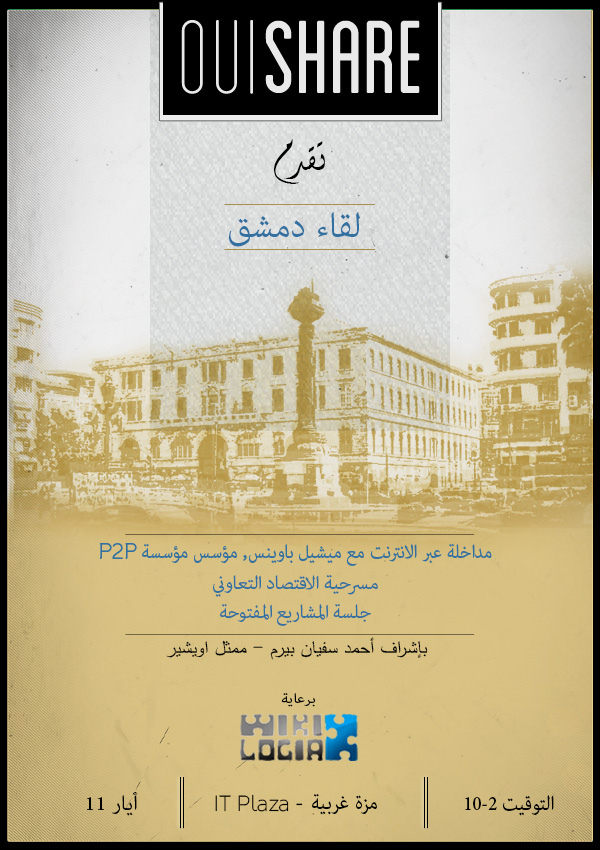 Would you be ready to carpool? Lend your house or your hammer to someone you don’t know? Give a few hours of your time to teach someone? Chip in someone’s project? If yes, then you’re in for a treat, as the collaborative economy is coming to the Middle East!

Wamda's contributors have been torn about whether the Middle East is ready for a sharing economy- Ahmad Majid said that there are endless possibilities for sharing in Saudi Arabia, while Gulay Ozkan noted that sharing startups in the Middle East will have to innovate to mesh with local culture.

Yet if you believe that a sharing economy is still just a Western boho’s dream, have a look at what Ahmad Sufian Bayram and his friends in Syria have to say. They recently set up the first MENA branch of OuiShare, a global group dedicated to supporting the collaborative economy.

They may be in the midst of a civil war, but they're ready to launch a new type of revolution in the Arab world.

What is the collaborative economy, exactly?

In a collaborative economy, people share their expertise, time, space and goods, both online or offline, in order to save money, maximize their use of resources, and connect.

Over the last 10 years, the movement has gotten traction globally, with the rise of open source, crowdsourcing, crowdfunding, collaborative consumption, and maker and hacker communities.

A year ago, a few French activists created OuiShare, to support the collaborative economy, first in Paris, then in London, Brussels, Barcelona, Rome, Madrid, Munich, Berlin and more. Bayram joined the open network earlier this year.

“Arab countries are no different than other countries.”

This is what Bayram keeps repeating. A 22 years-old student in business administration, he believes this "shift in paradigm" is happening in the Arab world as well, as people increasingly care about maximizing benefits rather than maximizing profits.

In Syria, people share electricity generators, and more than 38,000 people joined a Facebook group to sell their used items. In Morocco, Avito.ma, a classified ads website have become the second most-visited website. Hackerspaces and coworking spaces are on the rise. In Egypt, Palestine, and Lebanon people are using crowdsourcing to get informed about traffic through services like Wasselni or Ma2too3a.

It's still early days, however. Swaphood encouraged people to swap their items locally, but only nine items have been listed in the first quarter of 2013. Arabrooms.com wanted to let people rent each others' apartments, but seems to have pivoted into a traditional hotel booking service.

Beyram believes it’s just a matter of time. "Once people see the benefits, they make it happen."

Evangelizing in the Arab World

In the meantime, he's turned into a one-man evangelist for the collaborative economy, blogging and posting videos in English and Arabic to explain the concept.

Last week, on May 11th, he organized the first OuiShare event (shown below) in the Arab world, in Damascus, with the help of Wikilogia.

Following this event, Bayram created a Facebook group to foster debates and discussion. 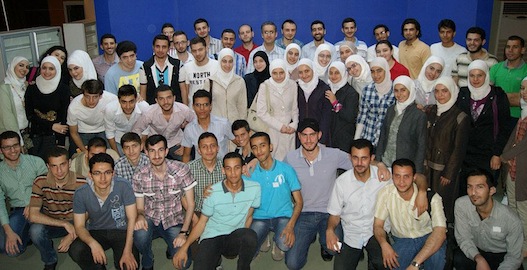 “People have to start, then the government will give it more power.”

His country might be in the midst of a civil war, but the Syrian student believes that governments throughout the region could one day play a role in supporting collaborative consumption, by giving legal incentives.

Now, he's planning future events in Beirut, Cairo and Amman, and hopefully in the Maghreb or Gulf, once he finds sponsors- or crowdfunders.