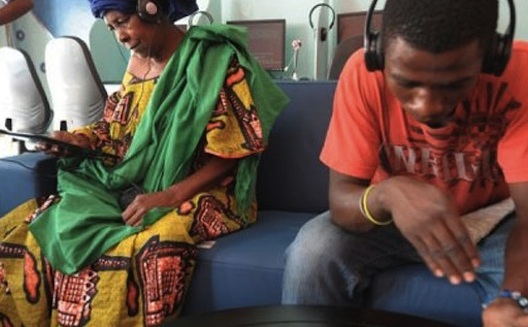 Does the future of the internet lie in tablets?

That’s what Médoune Seck believes. With the help of Google, he turned his internet café in Senegal into the first “tabletcafé in the world," and renamed it, well, Tablette Café.

To launch this new program, Google bought Tablette Café 15 tablets. Seck kept 3 of his old computers, but, the AFP reports, people much rather use the new tablets, which they use while cozily lounging on couches and armchairs. If they want to have a private video call, customers can use one of three booths. Tablette Café is open every day from 8am to 12pm, for the same price as before: 300 FCFA per hour (US $0.60).

So far, the relaunch is a success. Some users come out of curiosity, others come because they find using a tablet easier and faster, the AFP reports.

Seck believes “tablets are going to revolutionize Africa and Senegal” as they are easier to use. Tidiane Dème, Office Lead Francophone Africa at Google, adds that tablets may be more expensive to buy than traditional computers, but they require “25 time less electricity than a regular computer, and can work even when there are electricity cuts."

If this experiment works, why does it mean for the Arab countries of Africa?  Could tablets could help the growth of the internet in North Africa?

Fatim-Zahra Biaz, who recently founded New Work Lab, a coworking space in Casablanca, agrees. She believes tablets “can help democratize the internet and become powerful tools especially in the education field thanks to apps,” which she says are gamechangers for education and health.

Mazen Helmy from The District, a coworking space in Cairo, is not so positive about the trend. He believes that the high price of tablets are a barrier to wider adoption for those Egyptians who are not already using the internet. Yet they may enhance the experience for those who are already connected, he says: “tablets can help growth in internet access among people who already know and use the internet.”

Helmy agrees with Biae that tablets could play a major role in education, however. “Ease of usage is a strong added value for school where students can learn with tablets rather than normal computers,” he points out.

What about you? Do you believe the tablets could help people from North Africa access the Internet?