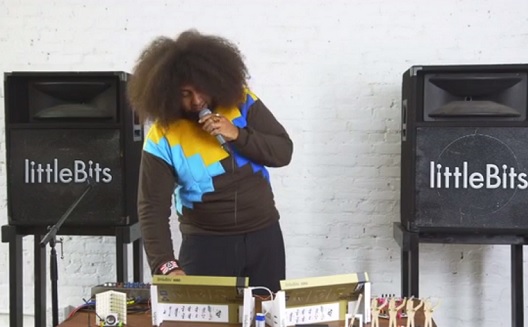 Lebanese entrepreneur and maker Ayah Bdeir’s startup littleBits, which has been hailed as the LEGO of electronics, has just released its newest and most exciting set of bits: the Synth Kit.

It’s been a little while since we last checked in with littleBits, but since then the startup has raised several rounds of funding, expanded its library of bits to just over 50 and, most recently, released its latest Synth Kit that lets makers build their own synthesizers and explore the world of music. They were also recently named one of "14 toys that will make your kids smarter" on TIME and have won several awards from Popular Science, Dr. Toy, and Maker Faire.

We caught up with product development manager Paul Rothman via Skype from their office in New York City to learn about the idea behind the new Synth Kit.

The wheels were first set in motion when Bdeir met improv comedian and musician Reggie Watts at a TED Conference last year and began hypothesizing ways to incorporate music synthesizer technology into the bits.

Several months later, Japanese audio technology manufacturer Korg’s product developer reached out to littleBits about possible collaboration and the spark was lit. Watts visited the littleBits team to consult on what a basic synth kit would need and Korg then developed the circuitry. littleBits assembled the project and made it compatible with any of their previous bit creations.

“The littleBits system really lent itself to exploring synthesis in a different sort of way,” says Rothman. “You can snap things together and create new larger circuits very quickly and fluidly.” Having first entered the world of electronics through music, Rothman was excited to get the chance to create and produce a magnetic, connectable, and modular version of a classic music tool. He explains that the original synthesizers were initially built in a series of connected modules within a larger machine. littleBits’ reimagining of a classic product deconstructs synthesis to allow users to build whatever they want.

But for those who aren’t synthesizer-literate, the set comes with a detailed instruction book explaining the history of synthesis and how it has been used in popular culture. Users who may be more experienced, like Watts, will find it satisfying and very customizable as well, says Rothman.

Watts demonstrates how to use a set of assembled bits in this video:

With the release of the Synth Kit, littleBits is starting a trend of creating new bits for different fields. Their earliest bits, and recent revamp of the “exploration” kits, which come in basic, premium, and deluxe models, focus on the field of design and were topped off with a major installation at the Museum of Modern Art in New York (which you can see here).

Now the team has moved to tackle music, and will continue to do so with a few more bits they plan to release next year which are anticipated to complement the Synth Kit. Also next year, the team has plans to look to different fields of science for new designs; they recently announced a new partnership with Arduino to develop modules that will allow users to write programs on their computer to control sensors, lights, and motors.  “We’re looking at these different fields of study and exploration and trying to bring littleBits into those spaces to create something new and interesting,” says Rothman.

littleBits continues to prototype in-house, handles manufacturing in Shenzen, China, and ships globally. Their main markets are the US, Canada, Japan, Australia, and the UK, with some shipments to Lebanon and the region, says Rothman. To fuel their growing team and array of products, littleBits has just secured a new round of venture capital funding of US $11.1 million with True Ventures and Foundry Group leading the round.

The new Synth Kit, which is now available for pre-order, will be shipped on December 6th, with 11 bits, including a sequencer, filter, two oscillators, a keyboard and speaker letting users mix and match to make the mini-synth of their dreams or their own instruments, as seen below: 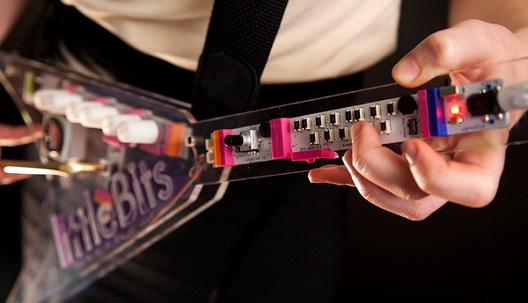