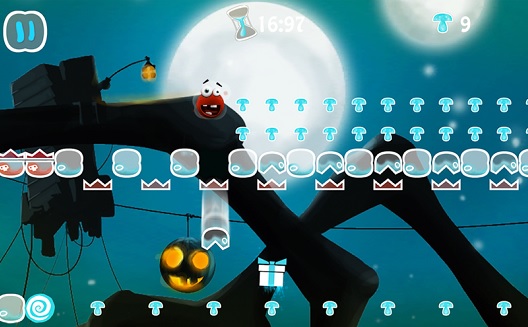 Drawing on previous themes and skills they’ve built since their launch in 2012, Lebanese game developer Game Cooks has demonstrated a new maturity with their latest title Escape from Paradise. The new game, just released today, comes on the heels of cofounder Lebnan Nader’s naming as one of the 50 gaming newsmakers who shaped 2013, by popular gaming news source Polygon.

Reversing the typical good and evil motif, players enter the mobile game as a little devil character stuck in a beautiful paradise. Tasked with escaping this scenic abode, the game of 150 levels allows players to bounce their way to the finish, collecting mushrooms and potions along the way, all within a fairly strict time limit. As you progress, new blocks are revealed which can either help you around the map or throw you off. Maps slowly get darker and more mysterious as you unlock new worlds.

The terrain includes stable blocks, falling rocks, warp portals, explosives, and disintegrating platforms. It’s a challenging title – I admittedly haven’t been able to complete some of the time limits. 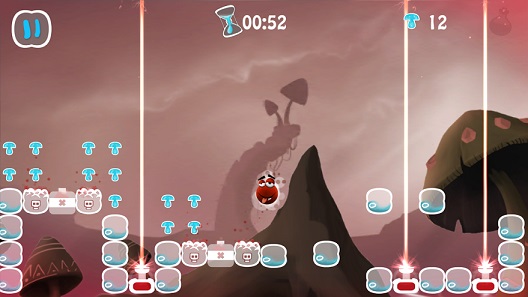 The graphics and color scheme are reminiscent of last year’s Captain Oil and the goofy theme pulls from their simpler titles like NERDS and Déjà Vu. While this certainly won’t be their last title (they already have others in the works), it is the best game they have created so far.

“I do think that if we end up creating 50 games, the 50th will be the most polished and sexy game. With each game we create we are getting better and better; with time and the right feedback, we’ll be able to get to something really international,” says Nader.

Game Cooks uses the freemium model as they have with each of their previous games; players can skip hard levels and buy character clothing and other customizations by purchasing more mushroom currency. The team, led by brothers Lebnan and Arz Nader has been hard at work, developing the game for five months while they also got a beautiful new office, created a new logo, hired some key talent, and began work on development of a new website.

While Nader looks to develop a title that rivals the major mobile gaming companies like Peak Games and Rovio, he’s already seeing some great recognition from within the gaming community. As mentioned above, Polygon recently named him one of the 50 gaming newsmakers who shaped 2013 - the only selectee from the Middle East - for working to overcome some key challenges in the region.

Lebanon’s notoriously slow and expensive internet, - which Nader says costs Game Cooks nearly $700 per month – regular power outages, and, most importantly, a lack of available developer talent can severely limit their ability to create great games at a good pace. He also laments the lack of frequent regional gaming events to help build partnerships and see what others are up to in the community. It’s certainly an uphill climb, as we’ve discussed previously, but the region’s players keep pressing on.

For Game Cooks in particular, the ability to build what they love is the key to their strategy. The team’s titles run from puzzles and action to strategy and memory challenges; they continue to develop whatever they enjoy at the moment, which is a freedom other developers in the region aren’t often  able to replicate. “We never really set a strategy for the type of games we wanted to create; we always create what we feel like doing right now,” explains Nader.

To make it happen, Nader is part of a sister development company in the same office which creates services and mobile apps for large companies and corporates, “giving us the freedom to develop what we really feel like, without focusing on the monetization or commercial aspect of stuff,” he says.

The ability to follow a creative impetus over a commercial need is not necessarily how traditional business, or the lean startup model in particular, is designed to work, but Game Cooks has found a way to keep its creative integrity while still bringing in revenue to sustain it in other ways. As Nader puts it: “[Commercialization] doesn’t imprison the creativity of our team.”