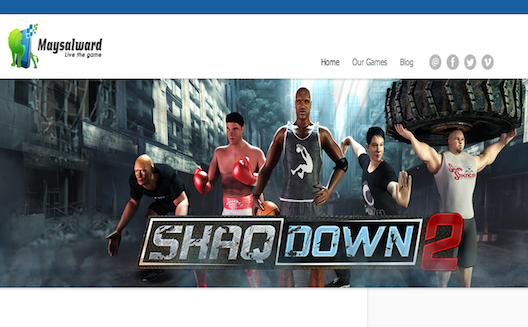 It has been a busy couple of months for veteran Jordanian mobile game developer/publisher Maysalward. In May, the company launched its newest game, ShaqDown 2, and in June, it signed a strategic partnership with telco Zain aimed at promoting the region’s game developing industry by providing indie developers with the technical support and know-how needed to scale their games.

ShaqDown 2 – the sequel to the popular Shaquille O’Neal-versus-zombie fighting game, ShaqDown – was launched across leading app stores in May. Maysalward’s role with the first ShaqDown was advisory and promotional in nature as it helped the game’s U.S.-based publisher, One Spear, tap into the Middle Eastern market. With the sequel, Maysalward was charged with 100 percent of the development.

The different approach, according to Maysalward founder and CEO Nour Khrais, is pretty obvious. “The only common thing between ShaqDown and ShaqDown 2 is that Shaquille is fighting zombies,” he said.

For one, Maysalward shifted the gameplay from a 2D runner format to one in which characters can move around a 3D pivot with complete freedom, thus yielding a console game-like feel (an update allowing for the use of a d-pad will be out soon).

The storyline differs as well. In the original ShaqDown, Shaq responds to a series of zombie attacks in cities across the region, while in the second installment, the zombies have returned and have brought the fight to Shaq in his hometown of Los Angeles. The zombies are now more powerful, so Shaq calls on a few of his friends for help including Jet Li and Muhammad Ali.

There has also been a shift in the game’s monetization model. ShaqDown 1, which was developed by California-based Hiptic Games, utilized a premium model (99 cents per download), while the new ShaqDown is a free-to-play game that monetizes through in-app purchases and a minimal amount of between-level ads (there are no ads during gameplay itself).

As both Maysalward and the mobile gaming industry as a whole search for an ideal formula for extracting money from games, this change in monetization models reflects the global trend of moving away from premium and toward freemium.

“All games are easy to develop. The difficulty is figuring out how to make money out of the game,” said Khrais.

In mobile gaming in general, around 2 – 4% of casual users make in-app purchases, while up to 10% of core and mid-core gamers will make the financial commitment, according the Maysalward team’s internal research. Because of this, the team is more focused on tracking the number of active users rather than downloads (ShaqDown 2 has been downloaded a few hundred thousand times thus far).

“What we’re tackling is making sure that once users download the game, they keep playing it,” explained Ziad Al-Masri, CMO and partner at Maysalward.

And while it’s a bit premature to be looking at numbers, it seems as though ShaqDown 2 has a solid active user rate, with approximately 60 percent of its users playing on a daily basis.

In addition to the ShaqDown2 launch, the Maysalward team has also been busy establishing a strategic partnership with the mobile carrier Zain. Announced in mid-June, the partnership aims to foster the growth of the game developing industry in Jordan and the wider region by helping indie developers scale their games and get them to the quality needed to be commercially successful.

“Part of our growth as a company was to go into being a publisher, which is not the aggregator type of publisher, meaning that we don’t just take a game, publish it, and take a percentage. So we were looking for a model where we can, from our relations with the Gaming Lab and the community, give back a bit of what we’ve gained over the past 11 years in the mobile gaming industry and help indie developers to get a better share for their games,” said Khrais.

“We saw a lot of our friends and colleagues with their own indie companies publishing and developing games in the past two years coming to us saying ‘guys, it’s a tough market, we built this game, there is zero revenue, we had to close down, we shifted to another model,’ and the more stories like this that you hear, the more damage you realize is happening to the gaming industry in Jordan,” he added.

Out of this issue, the Maysalward-Zain partnership, which will seek to scale indie games beyond the Middle Eastern market by utilizing the expertise, resources, and distribution networks of both companies, was born.

Maysalward will help polish promising indie games by providing developers with assistance on all aspects their games, from storyline to technical components including coding, graphics, animation, and gameplay. Indie developers may also benefit from Maysalward’s commercial Unity license, which will allow them to avoid purchasing costly individual licenses.

For its part, Zain will provide input and feedback from the perspective of mobile carrier including mobile user profiles and relevant handheld device information and statistics. The telecom provider is also developing a zone dedicated to game development in its Zain Innovation Campus (ZINC), which set to open in Amman’s King Hussein Business Park later this year. Promising indie developers can also pitch to Zain to get funding for their projects.

Under the terms of the partnership, revenues will be split between the developer and the publisher (Zain/Maysalward) 70-30 in favor of the developer. This split falls in line with the global norm, and is more favorable for the developer than the 50-50 split, which is the norm in the region, according to the Maysalward team.

Interested indie developers are invited to reach out to Maysalward for more information.