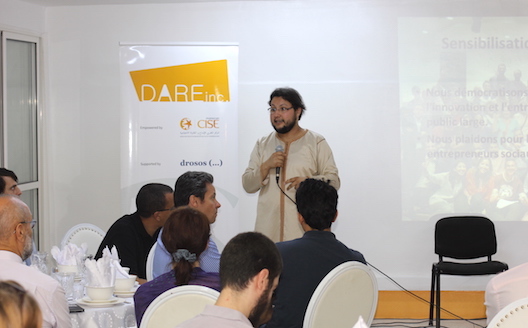 Considering how active he has been this year, it is hardly a surprise that so many entrepreneurs voted for him.

Addioui has a lot on his agenda. He is founder and president of the Moroccan Center for Innovation and Social Entrepreneurship (MCISE). He is the country director of ENACTUS Maroc, an NGO that enables students to create social entrepreneurship projects. And this year he launched DARE, Morocco’s first accelerator and coworking space for early-stage social impact companies.

He spends a lot of time mentoring startups and project leaders and spreading the word about the importance of social entrepreneurship in Morocco and abroad.

Addioui is constantly reminding us that entrepreneurship must have an impact, that entrepreneurs should find solutions to the many problems that Moroccans face, and that there is business potential in targeting the 99 percent.

The Moroccan startup ecosystem is still young but thanks to the efforts of passionate individuals like Addioui, it’s growing in the right direction.

“He fights on a daily basis to create social entrepreneurs in Morocco” wrote one voter.

“He simply empowers entrepreneurs with his sleep and blood,” wrote another.

Wamda will give Addioui access to its extensive network of mentors, investors, and fellow entrepreneurs, and any other support he might need to continue his work.

Addioui’s work on behalf of Morocco’s startup ecosystem is the best homage one could give to the late Karim Jazouani.

When the most passionate and powerful advocate of Morocco’s entrepreneurial scene passed away more than two years ago, the country was left short of a great man. While Jazouani cannot be replaced, Addioui is building on the foundations laid by Jazouani.

“[Having] this year Adnane [as winner of the prize] will not only honor the change makers, but  […] will honor Karim's name as well,” wrote one entrepreneur.

And as a friend of Karim said, “[Karim Jazouani] would be proud of Adnane.”