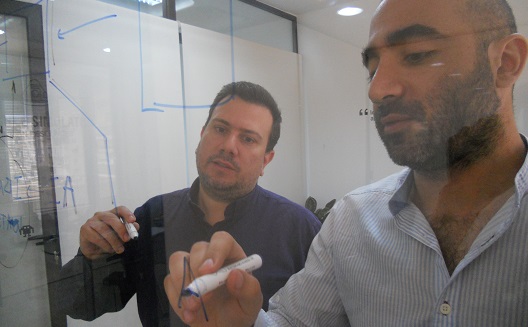 Being early to the market can be both a blessing and a curse.

Not only were they too early for their market they also started their business, Foo (which is a placeholder name used in computer programming), at a time when only a handful of venture capital firms had offices in Lebanon.

“We were really ahead of the market in the region. It was a good thing, but we also lost opportunities,” said Rayess at their spacious sixth-floor office suite in Sid Boushrieh, an area just north of Beirut.

They’ve been in the largely industrial area for the past two years with their staff of about 40, who make all of their products in-house.

Seven years earlier it was just the two of them with no office, money or support, but determined to start a company in Lebanon. They’d each spent more than five years living and working in well-paid and secure corporate jobs in the West – Nasr in Germany and Rayess in the US and Greece.

They gave themselves one year, invested $20,000 from their own savings to get Foo off the ground, and then watched as similar firms in other countries found the success they craved.

Foo had services similar to WhatsApp at the time, but little money for product development.

Rayess said they paid themselves a monthly salary of $300 for the first two years as they counted every penny along the way.

“The challenges and failures were being early to the market and not being able to get funding. Investors need a full legal business. If we’d gotten funding, we would have flown,” he said.

Their regional rival would eventually be sold to Facebook for millions of dollars, causing them frustration at the lack of a feasible ecosystem at home and at the same time vindicating their belief that they were onto something big, even if it meant delayed success. 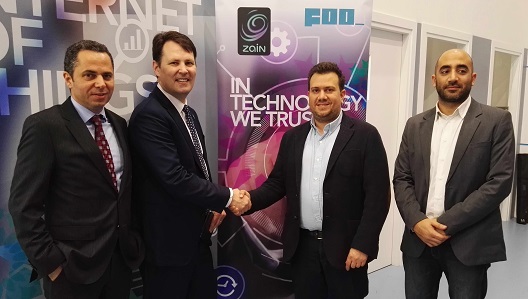 Foo shaking on their investment deal with Zain. (Image via Zain)

Ahead of the game

One of Foo’s first projects was a standout example of how timing can be crucial, and cruel: an encrypted messaging system, developed in 2009.

The founders said it was too politically sensitive during the initial investigation into the assassination of Lebanese Prime Minister Rafik Hariri, which occurred in 2005, and simply wasn’t sellable in Lebanon.

They went back and forth between trying to predict what the market would want and what they needed to do to keep up with existing trends, ending up pivoting several times – from products to services, then to a mixed model, then products, then back to services.

Now they’re back to building their own products for businesses in services industries, such as a customized ‘on-demand’ platform that can be rolled out for any company, and mobile software that provides an instant customer loyalty platform.

Their biggest failures were several promising B2C products they incubated but did not have the capacity to pursue and raise funds for, so they ended up putting them on hold or shutting them down. These include their news aggregator BulBul and a matchmaking app Psst.

It’s not an easy market either, with app development companies rising and falling in Lebanon and regionally. Dow Apps, Code & Dot, and Eweev are three success stories in Beirut alone.

One of the key partnerships they built has been with Microsoft.

In 2013 it won the Microsoft Partner Honors program as an independent vendor, after starting software development for Windows Mobile 6 two years earlier. The founders have judged the corporation's Imagine Cup competition and mentored at hackathons and tech days, as well as being commissioned for Windows 8 app design projects and collaborations on software for various Microsoft devices.

As they bring new members to their growing army of developers and programmers, they try to attract talent by offering competitive salaries and the opportunity to incubate and innovate ideas with the support of Foo.

In February, they secured an investment from the Kuwaiti telecom provider Zain, their first and only investor to date. For Foo, it is an opportunity for financial support for their innovations that might still be ahead of their time; and for Zain this “strategic stake” allows them to be ahead in their own sector.

He said Zain was using Foo products to make internal processes more efficient and to “start to push the innovation specifically at the customer experience area”.

As the company moves forward, they plan to open offices in the Gulf and to invest more in research and development around virtual reality, Internet of things, big data and artificial intelligence, and to continue incubating their own products.