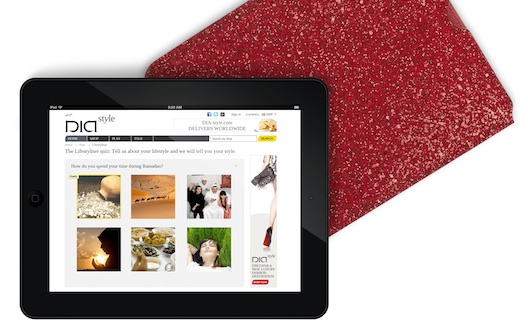 Although Ramadan can be a slow month for consumption, some startups have found ways to make the most of it throughout the past month.

Taking advantage of the shift in traffic surge seems to have been key to managing customers during the holiday season. In a recent report, The Online Project outlined how Twitter traffic shifts during Ramadan, with a noticeable surge in traffic from 9 pm onwards in all countries surveyed. The report found that the use of Twitter dramatically increased during Ramadan, with Tweets in Jordan and Egypt surging over 200% and in Kuwait exploding by almost 500%. Such information has proved useful for companies trying to exploit the holiday season.

Entrepreneurs have also adjusted their stock and produce to fall in line with the holiday season. Chouchic, a Beirut-based startup that sells high-end fashion at a discount, has been offering Ramadan appropriate outfits, along with a 70%-off sale to celebrate Eid. DIA-style.com, a new online luxury goods boutique based in Dubai, also created a Ramadan section on its website, featuring products such as abayas. The company also used Ramadan-inspired graphics and created a Ramadan Fashion Lifestylizer feature, which asked customers how they like to spend the holiday, and offer style suggestions based on their answers.

Such initiatives paid off. “We have seen a marked increase in traffic on the site as the month progressed as well as a rise in the number of repeat visits,” DIA’s CEO Rasha Khouri told Wamda.  “We’ve also seen more traffic to brands that featured in the results of our Lifestylizer quiz and an increase in sales; abayas were a star performer.” The targeted marketing seems to have helped; traditional garments such as abayas were also part of the offerings on Chouchic, but with prices slashed over the final days of Ramadan, they did not seem to be doing as well.

The holy month was not only used for fasting and shopping online, but also led to online philanthropy initiatives. Some startups decided to put their products at the service of others; Saudi Arabian company GameTako developed a game to raise money for Syrian refugees. As gamers created and sold traditional Syrian food in “Kibbe,” all of the game’s advertising revenue was donated to charity.

The media also experiences its high point during Ramadan, with advertising seeing a significant increase in response to original programming at peak times such as the hour before iftar. Indeed, Sony picked the holy month to enter the Middle Eastern market, by serving up its own version of the Ramadan musalsal, or soap opera. A far cry from hits like the period drama Sultan, the company opted to debut with ‘Everybody Loves Raymond,’ a sitcom about a family in Long Island.

Local producers also capitalize on the Ramadan season. The 99, an animated series featuring Islam based superheroes, also chose Ramadan for its initial launch in the Middle East. During Ramadan, episodes aired daily on MBC3 from Friday to Wednesday and was also released online on Yahoo! Maktoob, while after Ramadan, the series will continue to show weekly.

Masageel, a Jordanian cartoon focused on a Bedouin family and how they adapt to modernity, returned for a second season this year on MBC1. Mr. Moya’ad Zeidan, Managing Partner of Sketch in Motion, which produces the comedy series, said the company had extended the show, by doubling the episode time from 5 to 10 minutes, “following the great response and popularity the TV series gained last Ramadan.” This year the show was again a big success according to the team.

Thus by being inventive in how merchandise was offered, or capitalizing on increased viewership and time spent watching TV, the “slow” month can be one of the most productive for media and e-commerce entrepreneurs. The general lesson to startups in other sectors? Find ways to entertain.