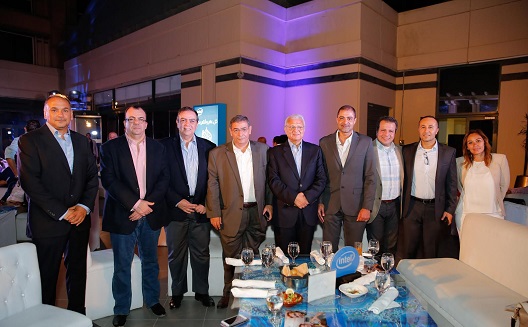 A group of attendees with Egypt’s former minister of communications and information technology, Atef Helmy. (Image via Intel)

Amidst the festive atmosphere of Ramadan, Intel in Egypt launched INARA, its latest youth initiative, on July 8. The initiative aims to support youth innovation by enhancing their educational status and enabling the skills they need.

The INARA initiative, which comes as Intel celebrates 10-years in the Middle East, has previously been launched in the UAE, and is part of its CSR strategy taking a particular interest in youth education programs.

Since 2004 they have been active in the field and their investments have included the Intel International Science and Engineering Fair (Intel ISEF), launched in 2005, and its Technology Development Lab and Higher Education Initiative at Nile University, launched in 2007.

INARA wants to tackle the whole MENA region, and to do so they say they have three cornerstones in order to create a knowledge-based economy in the Arab world: education, science and technology, and entrepreneurship.

"At Intel we believe that enlightening the youth with 21st century skills, combined with a strong focus on math and science has become a necessity in the highly competitive and fast changing global job market,” said Taha Khalifa, Intel's regional GM. 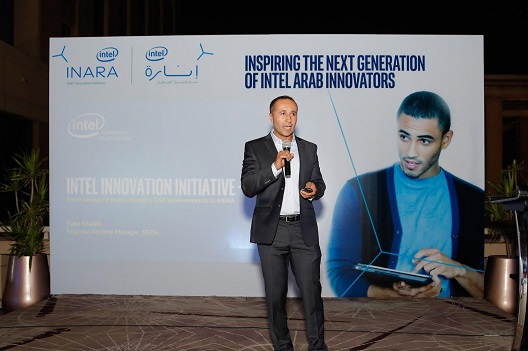 A summary of Intel's achievements in its community development projects boasts some large numbers in education, innovation and entrepreneurship.

Around 1.5 million schoolteachers from 12 different Arab countries have received training on modern educational tools and student engagement from the Intel Teach program. This program adopts a "train-the-trainer" method where every school chooses a representative trainer-to-be to attend the program along with other trainers. After successfully completing the course and gaining the program coordinator's approval, the teacher's mission would be to then train 10 to 20 colleagues in the same school.

More than 450,000 students had participated at the Intel ISEF, which was launched in 2010. The students hailed from 13 different Arab countries, including Egypt, UAE, Saudi Arabia, Qatar and Oman. The exhibition encourages students to create primary solution models for current problems.

As for entrepreneurship, more than 20,000 young entrepreneurs had participated in the Intel Challenge MENA competition in 2014, where the winners had the chance to visit Silicon Valley and benefit from worldwide expertise.

The event was attended by youth from different age groups, all of whom had benefited from Intel's development programs, including 17-year-old Yasmine Yehya, winner of the Intel ISEF 2015 Grand Award in Earth and Environmental Sciences, held last May in Pittsburgh, USA.  Yehya's project was "Rice Straw Power", a device that utilizes rice straw as fuel for recycling water to render it drinkable. Yehya expressed her delight at being given the chance to participate in the science fair, describing it as a "huge opportunity" for youth to display their talents. 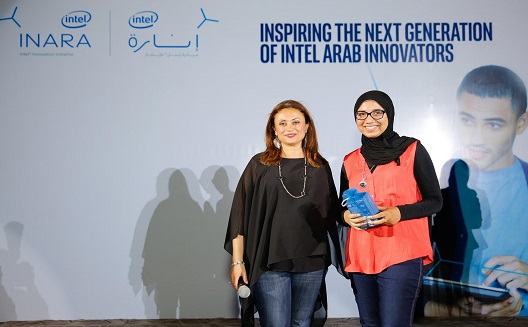 INARA's goal is that by 2019 they have given one million citizens with the skills and know-how needed to be part of their country's economic growth and its competitive edge. The campaign's strategy includes a series of workshops, programs and courses that span three areas: Ideation Camp, a workshop to provide participants with innovation skills training, Intel Learn, for skills needed in the future workforce market, and E-basics, a training program to build a business plan.

Another strategy is the Nata’alam initiative.

Nata’alam is an online Arabic community that provides resources and tools to empower teachers and educators with technical know-how through webinars, lesson plans and current materials. Nata’alam aims to engage 300,000 educators in the community by 2019.

Aside from Intel's endeavors, several other online educational initiatives have emerged in the region, like Egypt's Edraak and Saudi's Rwaq. Both are educational platforms that provide online interactive material for online learners, teachers and students alike.

With the support of local and regional partners, Intel intends to open networking channels between entrepreneurs and incubators through its "Intel Innovation Hub". The center also offers seed investment as well as mentoring opportunities with Intel's local partners.

INARA's launching was perfectly timed with the generous spirit of Ramadan, where various communities volunteer and participate in development programs. The event was attended a handful of executives in Egypt, including supervisors in the Technology and Innovation Center (TIEC) of Nile University, journalists and government official like Atef Helmy, former minister of communications and IT.

On the whole, this initiative seems a perfect extension to Intel's community development projects. Yet we await to see the level of interaction and interest shown by the target group, students and teachers alike.