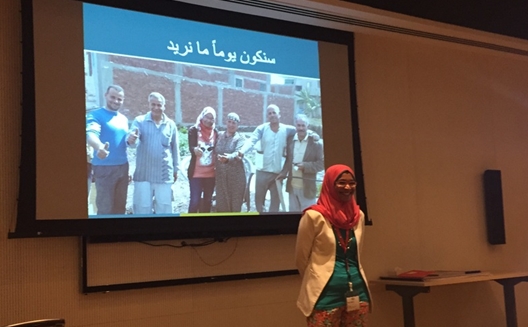 Mona El Khodairy receiving the Ecotaqa award at The Impact bootcamp in Dubai. (Images via Ecotaqa)

In 2014 Mona El Khodairy, an entrepreneur from Luxor, broke with tradition and became an entrepreneur - but she wasn’t entering a simple industry nor one that easily accepts women.

El Khodairy started a biogas company called El Khodairy Biogas, later renamed Ecotaqa, selling  units that produce biogas and biofertilizer from animal manure. She had to carve a place for herself not only as a renewable energy entrepreneur, but also within the male-dominated agricultural sector.

In a very restrictive social ecosystem like Upper Egypt, a young lady frequent travelling for work, and not getting married is not an easy thing to be accepted.

They did indeed “succeed in convincing the beneficiaries”.

“The idea started to spread so that we received requests from other governorates like Al Sharqia Governorate and Faiyum city, which led [me] to travel frequently. But my family were very understanding and my father helped me spread the idea outside our province,” she said.

“We used to visit villages and centers in Luxor explaining the benefits and importance of biogas.”

Egypt relies on several sources for nonrenewable energy, most importantly oil, natural gas and an increasing amount of industrial-use coal.

Now, with electricity prices rising as the government brings them into line with production costs and the ongoing shortages until at least 2019 of natural gas, the country’s main power generation fuel, the need for other sources of electricity has become pressing.

Although solar, and to a lesser extent wind, are the renewable energy foci for Egypt, biogas is perhaps more useful in certain sectors - particularly those at the forefront of the county’s massive waste problem. It can be produced from composting animal waste and its produces not only gas for power generation but also organic fertilizers - critical for Egypt’s struggling agricultural economy.

Egypt produces 90 million tons of waste annually, with 56 percent of this waste being organic, some of which is dumped in festering canals.

A UNDP study suggested that if every household could source 50 kilograms of animal manure daily, that would produce enough biogas to replace liquid propane gas (LPG) cylinders for more than 8.9 million rural homes, and reduce CO2 emissions by 7.56 million tons a year. 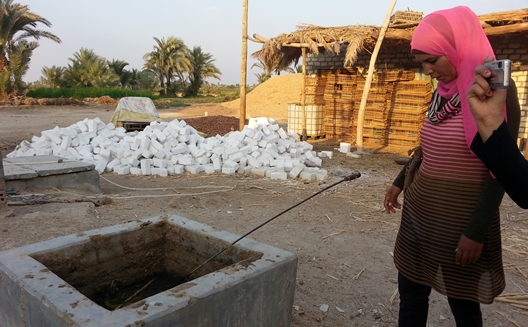 A biogas unit at a farm in the Luxor governorate.

Success on the ground

El Khodairy’s startup has built 140 biogas digester units for farmers in eight districts, including Luxor, Qena, Sohag, Asyut and Minya, and in more than 40 villages and centers.

“Every biogas unit needs three days to be fully implemented, and 15 days to start producing the gas,” said El Khodairy.

The startup received funding from the Ministry of Environmental Affairs to provide biogas units for villages as part of a support program to raise awareness and use of biogas - part of which was a four month-long training course which El Khodairy completed in 2013.

Initially, Ecotaqa produced its units “in cooperation with the ministry” until the latter retracted its support at the end of 2015, although it still supervises unit production and offers beneficiaries free fireplaces to work with and free transportations.

This led to financial difficulty as the cost of producing biogas fell on the users.

“I often meet beneficiaries who are convinced of the use of my idea, but are unable to afford the financial costs,” said El Khodairy.

The demands of producing biogas units

The price for one biogas digester starts at $500, where the beneficiary must have at least three cows to produce four hours of gas, or the equivalent of two and a half gas cylinders.

The smallest biogas unit supplied by Ecotaqa will make enough organic fertilizer for three acres every year. El Khodairy said this would increase crop yields by 30 percent, as well as making farmers immune to the increasing prices of chemical fertilizers.

One biogas digester needs 50 kilograms of animal manure and 50 litres of water for the reaction to take place. 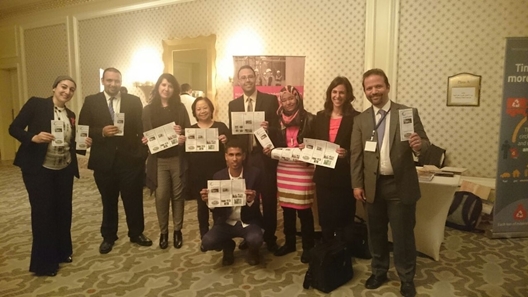 The UNIDO event was a turning point for El Khodairy, who is center-right of the 'Grow Your Company' participants.

El Khodairy is targeting farmers who have a minimum of three cows and large chicken breeding farms.

The market has the potential to be large. Farmers represent 51 percent of the Egyptian population, even though the share of value added agriculture of GDP has fallen from 31 percent in 1972, its height since World Bank records started, to 11 percent in 2014.

Yet competition for that market is still small - largely because it’s also very tough.

Social startup Biogas People is on hold, according to the founder Hany El Khodary, while Taqa Solutions, which was targeting large-scale poultry farmers to supply biogas digesters, has similarly struggled to find its feet.

El Khodairy now looks forward to generating a 1000 units in 2018, and hopes, in the future, to generate biogas from leftover food in universities and restaurants, and then add individual houses to the list.

“My biggest dream, though, is to build a biogas generator,” said El Khodairy

To make her goals a reality, El Khodairy has to work hard to spread the idea and try to attract partners.

April 2015, she took part in a Grow Your Company competition by UNIDO to support entrepreneurs who work in waste management.

The competition proved a turning point as it allowed for El Khodairy to meet Omar El Maraghy, cofounder and CEO of Egyptian Sustaincubator, which supports sustainable ventures. She was selected for their year-long incubation in exchange for equity, which El Khodaity did not wish to disclose.

Sustaincubator usually takes between 10-20 percent equity in the startups it incubates, according to its website.

After the incubation, the company’s name was changed to Eco Taqa, as a means to market it more effectively.

In June 2015, Eco Taqa won first place at The Impact bootcamp for social entrepreneurs in Dubai. The bootcamp was organized by Ahead of the Curve social enterprise.

Taking into consideration all the business and social challenges, will Khodairy manage defeating  her hard times and achieve a local and global recognition for her startup?