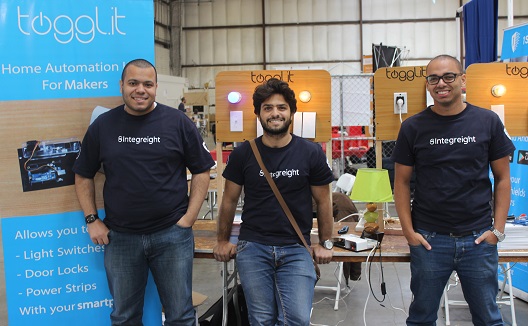 Togglit is a set of automation tool kits that allows people to control electrical switches and devices in their homes with their smartphones, according to a statement.

It plans to open pre-orders in August.

CEO Amr Saleh said the development of Togglit was self-funded, through sales from the “cash-flow positive” 1Sheeld developer accessory that made Integreight famous.

The company’s vision is enabling people to become makers and innovators themselves, and Togglit can be considered a next step in that direction. It is designed so that people with limited technical backgrounds can use it, and comes with a Togglit app.

The three so-far prototyped kits are a light switch kit, door lock kit, and power strip kit. The app allows switching on and off lights, devices, and locks, while providing information on electricity use. It is designed as a kind of box to be installed over switches and power plugs. 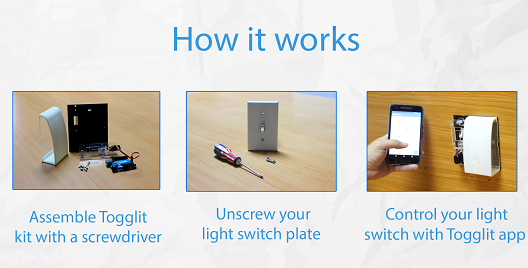 “For example, it allows control of light via voice recognition through your smartphone,” Saleh said in an email to Wamda.

Togglit builds further on the concept of Integreight’s first product, 1Sheeld, which was launched in 2013 and also enables people to control switches and power-connected devices by smartphone.

1Sheeld combines multiple Arduino shields – accessory modules for extra capabilities– in one, and “allows makers to use their smartphones with Arduino”, cofounder and Saleh said. Arduino is a creditcard-size prototyping tool for hardware automation, globally used by makers and engineering students.

Togglit is meant to make this process easier, without engineering or coding, requiring one screwdriver only.

Omar Badr, communications manager at Flat6Labs, said the easy set-up of Togglit make it a "very promising" product. He expressed Flat6Labs' confidence in Integreight, given its success with the kKckstarter campaign and "the buzz it created around it".

The company is based in Cairo, has seven employees, and was launched as a joint stock company in June 2012. Integreight Egypt is now fully owned by Integreight US, which is a holding company incorporated in Delaware, Saleh said.

Eight graduates from Helwan University founded Integreight, including Saleh and CTO Islam Mustafa. Their first idea was commercializing their graduation project Smart BreadBoard, but that lacked the finances needed for R&D, Saleh said in previous media comments. They then decided to launch Sheeld1, as it was easier to commercialize.

Integreight received seed funding from Flat6Labs (Sawari Ventures) and further funding from Cairo Angels in 2013, used for building Sheeld1 and bringing the product to the market, Saleh told Wamda. He could not disclose the amount of the funding.

More funding came through Kickstarter, a global crowdfunding platform. While having a goal of reaching $10,000, Integreight collected over $85,000 with the crowdfunding campaign.

The price of one Togglit kit will be less than $50, of three kits combined less than $100. Integreight plans to start shipping in early 2017. Togglit is manufactured in China, and will at start only be available in the US.