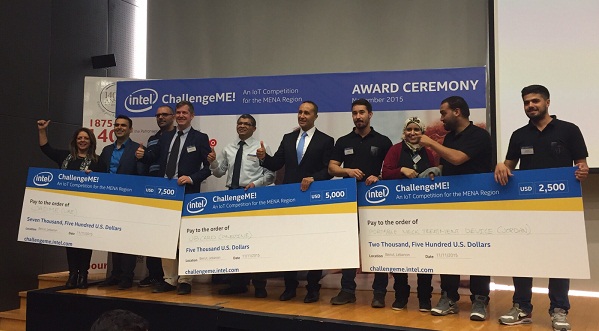 A logistics platform, a digital business card concept and a portable neck treatment device took top honors at Intel’s ChallengeME competition, an Internet of Things (IoT) contest organized by Intel for the first time in the region.

The awards ceremony was held on November 11 at Berytech in Beirut.

Although a good amount of money was on the line - $15,000 for first place - the event showcased the breadth of applications and ideas in the rapidly-growing field.

"Among all the technology trends that are taking place right now, one of the biggest rising sectors is the Internet of Things," said Berytech chairman Maroun Chammas, addressing the audience. "It’s the one that’s going to give us the highest disruption over the next few years while creating pioneer opportunities in the tech field." 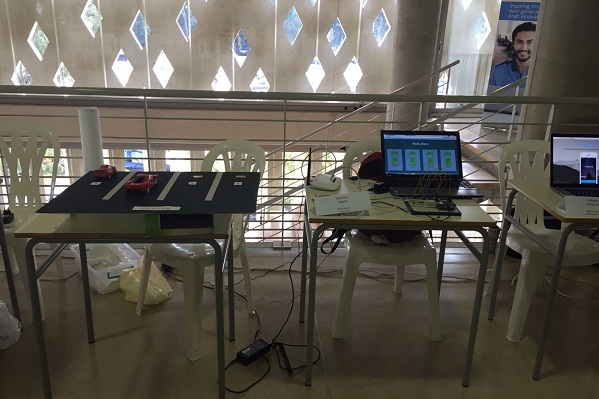 Participants had to have working prototypes.

Of the initial 700 applicants for the challenge, 15 were shortlisted and flown to Beirut for an intensive three-day workshop in Berytech. They each had to show off a working prototype.

Winning prototypes were "original, feasible and scalable, which is the main thing we're looking for", said Rabih Nassar, a serial tech entrepreneur and juror. "Many of the 15 [participants] presented solutions to Lebanon's current issues, like environmental monitoring." Projects include a sensor-automated walking cane for the blind, and automated pet-care devices. $15,000 were up for grabs.

LoadMe, an Uber-like platform that connects cargo owners with nearby lorries won first place and $7,500.

"The cargo business is estimated to be $40 billion [in the Middle East], 30 percent of which go to road transportation alone,” said LoadME cofounder and CEO Sebastian Stefan. "That's $12 billion. We have a huge market in the Middle East, especially in the UAE."

Digital business card platform UBCard got second place wth a prize of $5000. "It's taken a lot of effort to get to this stage, having ...launched from Palestine," said founder Hafeth Zughayer, "and look where we are right now. We hope to disrupt the traditional exchange of digital cards."

LoadMe and UBCard were qualified to participate in the international ChallengeUp event in UK, organized by Intel, Cisco and hubraum.

"I know we feel here in the Arab world that the outside world is ahead of us in progress," said Lebanon’s Minister of Telecommunications Boutros Harb. "But I refuse to have Lebanon behind, or for Lebanon to stay behind, and that is why I have taken the 2020 challenge for Lebanon… I'm very proud that there are people here with the potential to be entrepreneurs and to change the world."

9.  Sensio Air (Lebanon): An air-allergen tracker for homes, connecting to a smartphone to show air quality.

10. TIIFA (Algeria): A low-cost solution that combines several technologies, including IoT and e-textiles, to help children with autism to speak, and practice various activities.

12. Pathfinder (Lebanon): A group of iCloud-connected sensors to aid of the visually impaired.