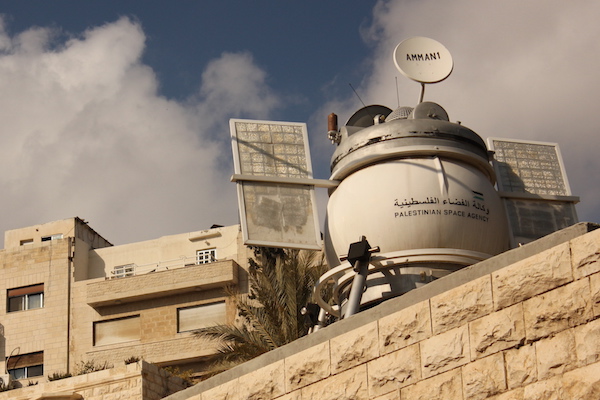 An art installation in Amman that could soon have a real-life counterpart. (Image via Sam Wendel)

Watch out Elon Musk, a new force is awakening in the business of space.

Partnering with the European Space Agency and the European Investment Bank, the Jordan Space Ventures fund will officially launch after closing total investments of 7.8 million euros (approximately US$8.4 million), according to a press release.

The fund will be the first of its kind in the Arab world, said Oasis500 CEO Yousef Hamidaddin at a press conference.

And by promoting the business of space-tech, the fund is reflecting a larger trend in the industry.

Once the domain of space agencies and fuelled by lucrative government contracts, the space industry is trending towards the entrepreneur—like entrepreneur and engineer Musk and his company SpaceX.

But it’s not all about rocket ships and colonizing the solar system. Plenty of practical opportunities exist in the business of space for enterprising entrepreneurs - and now that opportunity extends to MENA.

The goal of the Jordan Space Ventures, according to its website, is to create “sustainable startups that are capable of providing new solutions to existing social and environmental problems in key sectors.”

Some of those sectors include logistics, water management, agriculture, emergency relief, energy, and health.

While the Oasis Space Ventures may be a step towards unlocking commercial space enterprises in MENA, it’s far from the region’s first encounter with space tech.

Growing interest from the public sector

Despite a trend away from publically funded space initiatives, in MENA there has been a recent flurry of government investment, and the bulk of that is coming from the United Arab Emirates.

In May 2015, the UAE Space Agency announced the establishment of a $27 million Space Research Centre to be based in Al-Ain. The Centre is intended to be an incubator for space research, development, and innovation.

And that’s just one of the UAE’s most recent space projects.

In addition to putting several satellites into orbit in the last decade, in 2020 the UAE plans on launching an unmanned space probe on a 7-month, 60 million kilometer journey to Mars.

Once in orbit, the probe will use imaging equipment and ultraviolet and infrared spectrometers to monitor and gather data about the planet’s atmosphere and its evolution.

But the UAE isn’t alone. Many countries in MENA have government space agencies or an agency with space-related research and activities under its jurisdiction.

Some have even pushed for a Pan-Arab Space Agency comprised of Arab League members and modeled on the civilian-led European Space Agency. 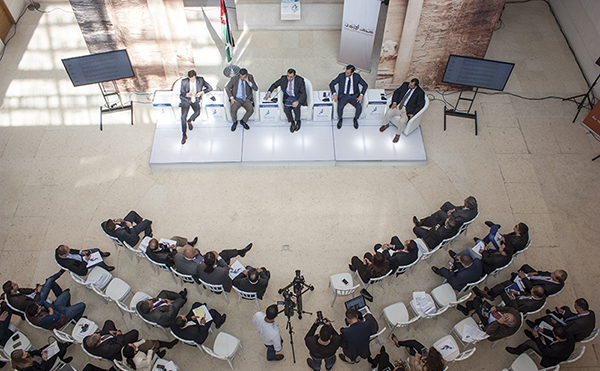 Oasis500 and partners announced the space venture fund at the Jordan Museum in Amman. (Image via Oasis500)

Exchange programs and partnerships have long existed between MENA and foreign space agencies like NASA or the ESA.

In 2015, four Jordanian university students interned for two months at NASA’s Ames Research Center in Silicon Valley as part of an exchange program. There they helped develop technology for use in an upcoming mission to Europa, one of Jupiter’s moons.

This exchange program is slated to continue on an annual basis, and is just one instance of the regular knowledge-transfers occurring between MENA and foreign space agencies.

Another example of international collaboration is NASA’s Water Information System Platform for the Middle East and North Africa Region, which looks to partner with government ministries from Lebanon, Jordan, Egypt and Morocco. Currently in development, the initiative will use space-based remote sensing technology to improve water resource management and agricultural planning in MENA - one of the world’s most water-poor regions.

But international initiatives are also pushing to establish a homegrown pipeline of innovators.

Arab names often pop up in the ranks of NASA and ESA employees.

For example, the senior software engineer on NASA’s Orion program is Soha al-Qeshawi, a Palestinian from the Gaza Strip. Many like al-Qeshawi end up working overseas in part because of the lack of opportunity in space-related work in MENA.

Now, as the public sector cedes ground to the private sector in the space industry, MENA has an opportunity to entice regional talent to innovate and succeed here in the region, instead of going abroad.

Opportunity in the private sector

MENA’s entrepreneurial awakening has opened the door for commercial space-tech to potentially flourish in the region.

But the launch of the Jordan Space Ventures fund offers a glimpse of a wide range of areas in which entrepreneurs can innovate and capitalize—and not just in MENA.

As a collaborative effort, the Oasis Space Venture’s website is showcasing a number of space-based technology projects already operationing in Europe as inspiration for entrepreneurs in the region.

These projects are working on space-based technologies in a multitude of fields: tourism, education, media, transportation, security, environment and resource management, food and agriculture, logistics, maritime, health and others.

In order to receive funding from Oasis Space Ventures, startups must apply and pitch their company to a jury that will select the projects to be accelerated.

Surrounded by a harsh landscape filled with soaring red cliffs and bright orange sand dunes, Damon’s character battled to survive with limited resources at his disposal.

Damon may have been the film’s starring attraction, but the beautiful landscape had a stand-in too. It was Jordan’s Wadi Rum.

Soon enough, Jordan and MENA won’t be only known to the outside world for portraying alien planets in films when it comes to outer space.