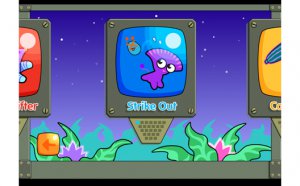 Chosen to give the impression of a robotic metal sound, Zonkt! is the name of a new iPad game launched by Amman-based videogame development studio Quirkat, which was established in 2004. "The game belongs to the Arcade genre but doesn't look like anything you would find on the app store," says Mahmoud Khasawneh, CEO of Quirkat.

Zonkt! is a fast-action arcade game where the player has to save gabloos, a group of magical space critters that landed on earth on a quest to find life beyond their planet, which is named, well, Gabloo. Having landed in the backyard on a robo-scientist called Zonkt who locked them up in his "crate of cruelty," the player has to save them before Zonkt uses his compressor to make jelly cubes out of them and cook them.

In building the unique game, Quirkat tested out a new way to develop the game concept. "We just went to one of our developers and asked her to work on a game she would like to play, based on her own interest and the artist's interest", says Khasawneh. The story developed on the fly as the producer was wrote bits of the story and developer built the platform. After three months of development, it launched at the end of last week.

This is the first game produced by Quirkat that doesn't have an Arabic version, "because it is not language intensive," says Khasawneh. Yet he points out that the game is utterly local to the region; all of Quirkat's production and development takes place in Amman, supported by a small art team in Beirut, and a corporate headquarters in the UAE. Zonkt! is Quirkat’s third iPad game, following its classics Pegs by Quirkat and Quirkat game.

The game will be launched on other platforms within the coming two weeks, and Quirkat is now working on a Playstation 3 title to be released in six languages and launched by the end of the year, along with three game applications, which follow its first Playstation Game, MENA Speed (Sur3a), which the studio released in November 2011. "We don't worry about the platform anymore, but the concept itself," says Khasawneh.