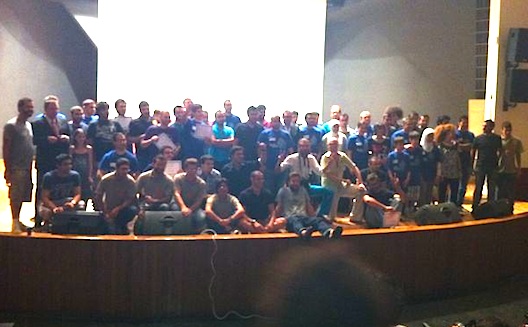 This past Friday, Saturday, and Sunday, entrepreneurs gathered at Berytech in Mansourieh, Lebanon, overlooking a scenic view of Beirut as they brainstormed and coded projects for Startup Weekend Beirut.

Ever since the first Startup Weekend in the Arab World in November 2010,  hosted by Wamda CEO Habib Haddad’s YallaStartup! in Beirut, the Startup Weekend fever has been spreading quickly. In 2010, the Middle East region hosted 3 Startup Weekends, says Startup Weekend Regional Operations Manager Keith Armstrong. In 2011, there were 14. In 2012, there have been 13 thus far, and 17 more are planned for the rest of the year, for a total of 30.

Armstrong stresses that the goal is not necessarily to exist Startup Weekend with a fully viable startup- which rarely happens- but rather to jumpstart new innovations by undergoing experiential learning. “It’s like a crash course in co-founding dating,” says Armstrong. “There’s no better way to figure out what it's like to work with someone than working with them for 54 hours.”

At this Startup Weekend Beirut, which was organized by The eClub, an entrepreneurship support group formed at AUB, that was likely true for most of the entrepreneurs; none of the ideas seemed immediately commercially viable. Yet three major elements stood out at this event, compared to others.

In the end, the four teams that won had each demonstrated a prototype.  The prizes were generous, including $10,000 for each winning team, along with mobile incubation by N2V, a spot on a TV program that supports and awards Ideas, sponsored by Ideaz Prize, Boot-camp Training with Oasis500, entrepreneurship training and coaching given by Potential and Cisco Entrepreneur Institute, an a slew of financial awards sponsored by eClub.

3rd Place: LivingBand tied with LingVee, a mobile application designed to teach people how to write in Arabic, by having users trace the outline of words. The app adds gaming elements by providing feedback and incentivizing users to do better (check out our video of the app). LingVee was built by Ata Alqadi, leading organizer of the last Startup Weekend Amman (and the next one!), Bayan Bibi, who pitched at the last SW Amman, and Keith Armstrong, while LivingBand was built by the Anghami dev team.

2nd place: Preso.ly, a presentation software that aimed to simplify presenting by allowing users to load their presentations simply by scanning an online QR code with their mobile device, loading it on any browser, and controlling it with their mobile phone. Rather than compete with existing presentation platforms like Prezi or SlideShare, it plans to offer compatible services. Team members include Donald Derek Haddad, Danny Chami, and Eddie Chami.

1st place: AID, a team that gave an impressive pitch about their mobile application to assist the deaf. The team, which consisted of Osama Brosh, Omar Turk, both high school students, along with developer Dani Arnaout, and designer Natalie Ghossein, pitched an iPhone application that did three things for a deaf user:
1) it would notify him via vibration and light when a louder-than-usual sound was occurring, to warn of potential danger. 2) It learned typical everyday sounds and would notify the user when that sound was occurring, saying “your doorbell is ringing.” 3) It leveraged a Google API to offer speech-to-text functionalities.

While I’m skeptical about the actual viability of the product (the speech-to-text is the most crucial element, and Google might be able to create a better app for that, unless these guys localize), the app was built by 17-year-olds and the idea rocked. Check out our interview with the AID team and stay tuned for a complete list of teams.