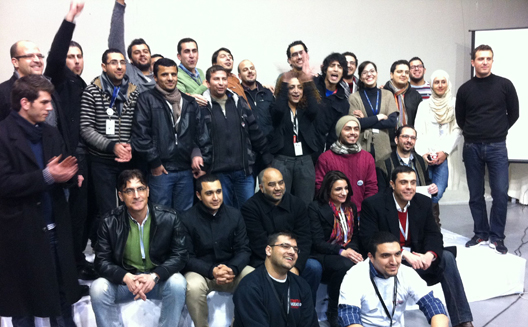 Startup Weekends may seem like a great way to dip a toe into the business of building a startup. Yet as mentors, writers, and spectators huddled in small groups in a cold, cavernous gallery this past weekend at Startup Weekend Amman, it was clear that this event for not for the casual participant.

The event begged a bit more endurance than usual (says the journalist, who only stayed late on the third day). Not just because food disappeared after noon on the third day; pouring rain and intermittent sleet outside further highlighted the fact that building a startup in Jordan can involve facing harsh conditions. Yet teams persevered, pow-wowing in heated, glass-walled rooms, their pacing, ranting, and scribbling on full display in a life-size entrepreneurship diorama of sorts.

The fact that most were web or mobile applications was par for the course, not solely because of the support that tech ideas receive in Jordan, through accelerator Oasis500 among others, but also because, as Startup Weekend Cairo attendee and Wamda contributor Khaled Sadek recently pointed out, if you only have 54 hours to execute an idea, it’s simplest to choose something web-based.

As we fueled ourselves with tea and typed where we could, it was clear that a mature set of players were at work. Many, as organizer Ata Alqadi pointed out, already had jobs. “I thought most of the attendees would be students,” he says, “but over 70% of those who registered were professionals.” Most formed a new idea at the event, but already worked for a company that could implement the idea, or for a separate startup that may be able to leverage the expertise of newfound contacts.

Those that I thought had the greatest potential turned out to be ideas that the founders had been building for some time. Codely, an online ICT tutorial platform designed to teach grade schoolers basic coding skills, was a project that Fouad Jeryes of Amman-based tech show techtech.me had been fine tuning. Its usefulness in the market was clear, and it seems ready for deployment, but I wondered if an Arabic version wouldn’t have broader reach. Walid points out the issues with their pitch that may have cost them placement in the competition.

The founder of Dalalat also impressed us with his focus. He explained that he intended to analyze keywords on Arabic webpages and sell the resulting Arabic content metadata to companies throughout the region. The ability to improve Arabic content indexing might gain Dalalat clients from search engine and media companies, yet his plan was to crowdsource the process eventually rather than have a dedicated team. This could make or break the idea, as it could compromise quality and consistency without enough traction or oversight.

Another idea that seemed feasible was winner SafePlay- mediocre name, great idea: an iPad game teaching children appropriate behavior through feedback in a cartoon simulation. The animation was decent, especially for a 2-day old prototype, and yet I again found myself wishing it were localized in Arabic for this market, although they aim to target a global market.

Another noticeable element was that there weren’t a lot of women at Startup Weekend Amman, but of the women present, many lead their teams, including social donation platform Makhaditi, regional NGO map and listing site Sharakeh, and Dabberny, a delivery service website local to Amman, as well as SafePlay. While 4 out of 21 teams- around 20%- seemed more than the proportion of women generally present, it would be great to see more women in the future.

SafePlay ended up winning, with a regional news aggregator iPhone app, NewsMapia, in second, and 7aregha, the social weight loss program, in third (a full list will be posted soon). One item that NewsMapia might consider adding in the future would be smart aggregation, unless they don’t want to compete with Agenda25; relying solely on curation performed daily by the team seems labor intensive.

The judges weighed a variety of factors when assessing the ideas. “We examined the team's evidence of customer validation, their execution, and their business model,” explained William Kanaan, the New Business Development Manager for the Middle East and North Africa at Google. “We also looked at how they presented the concept, its potential in the market, and their execution. Most of the ideas were not disruptive, but these teams have worked very hard over the past two days, and they've created ideas that are locally relevant with good potential," he concluded.

The general consensus was that a few crucial factors made the event a bit more of a struggle than it could have been. The organizers couldn’t change the fact that the power went out on the second day, causing teams to flee to N2V Labs in Sweifieh, but Alqadi said that in the future he hoped to secure the sponsors sooner and come up with a better venue solution.

Yet the less-than-ideal venue turned out to mask a deeper issue in Amman. Most other Startup Weekends- including those last year in Casablanca, Cairo, Alexandria, and Dubai, and Cairo this year, have benefitted from being hosted at technology centers or universities. Yet at Startup Weekend Amman 2012, “The first university we secured cancelled on us,” says Alqadi, when pressed about what happened. “Then a second university cancelled one week before the competition. We had to work for 24 hours for 2-3 days before the event to find a new venue. That was our main challenge.”

Alqadi admitted that in the future his team hopes to secure funding- and more of it- sooner next time. When Aramex and N2V confirmed their sponsorship in January, “we picked a small sponsorship number,” he says. “We thought it would cover 50 people; we didn't expect to have 80-100.” Yet, he says, they’re hoping to make a bigger, better Startup Weekend Amman in 4-5 months.

Google, for one, is certainly on board. "I was excited to attend the event,” says Kanann. “We at Google believe in the cause; that's why we are a global sponsor of Startup Weekend.”

Nagi Salloum of N2V also pledged support. “This is the first chance that many of the participants had to get out of their houses and build something new. You can see a glimpse of the potential,” he says Nagi Salloum. “I'm definitely interested in hosting more events like this in Amman. People will get more confident with time.”

Hopefully so will universities and tech spaces, which should get on board and open their venues to startup weekend events, in Amman and outside the city as well, if they want to support entrepreneurship on a holistic level in Jordan.