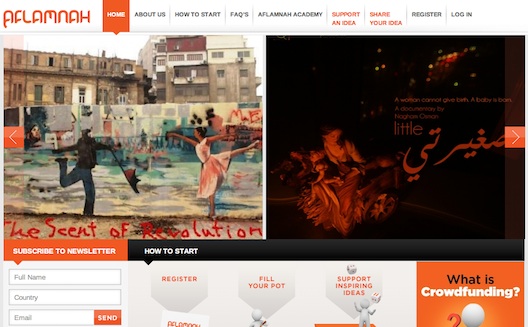 Crowdfunding is the latest buzzword making the rounds in the entrepreneurial world, and a UAE initiative is out to show there’s more to it than just buzz. Aflamnah was only launched on July 1, but already, it’s garnered quite a bit of attention.

While the name may be misleading (“Aflamnah” is the Arabic word for “our films”), the digital platform helps not only independent filmmakers, but also artists, scientists, students, innovators, thinkers, and anyone with a creative project to raise funds to help put their work out into the world.

Vida Rizk, the site’s principal founder, says that while many in the Arab world haven’t yet been exposed to the young concept, it’s not something they shy away from. “In fact, people are very comfortable with it – once they understand it,” she says. “Even abroad, it’s only a three year old concept.”

But despite the popularity of U.S.-based crowdfunding platform Kickstarter (where Infinitec funded its innovative Pocket TV) and IndieGoGo (where AltCity is currently funding startup acceleration), and the launch of new global platform Sprowd, many don’t understand it - yet. “We knew that going into this – out of every 100 people, only five or six know what crowdfunding is,” explains Rizk. “But the content is not difficult to wrap your head around. One of our main challenges and objectives is to educate the market and bring crowdfunding to the Arab world. It’s amazing when you see the light bulb go on; there’s no one that doesn’t like the concept.”

True to its name, Aflamnah launched with six crowdfunding campaigns, all films. Rizk says the film community is already familiar with the concept, so the opening campaigns were fitting. Sabah Haider’s short film Abu Rami – one of Aflamnah’s launch campaigns – managed to raise $2440 in a 28-day campaign. Only a few months ago, Haider’s film was well on its way to completion with the help of funding from private investors - until those investors paid attention to the theme of the film: infidelity.

“They deemed the film controversial,” says Haider. “So basically, that put me in a situation where I had to suddenly finance a film - fast. I knew about crowdfunding already, and friends of mine had tried it.” Haider launched a campaign on international crowdfunding platform Indiegogo, where she raised $4000 dollars. But that wasn’t enough, so when Rizk approached Haider to be one of Aflamnah’s launch campaigns, it was an easy decision to make.

“It was nice to be able to stand out more on a new platform,” says Haider. “I think crowdfunding is a great idea, because it gives a structure to an artist to independently finance their project. But there are challenges: it’s really new to the Middle East, so there’s a huge learning curve, and I am part of the first generation of regional artists who have to deal with the brunt of this learning curve. Also, there’s a lack of cultural tradition of contributing to the arts, and to the creation and dissemination of cultural and artistic projects. People can make you feel like you’re begging.”

Crowdfunding has given regional innovators an alternate way of going about funding their projects, one that’s focused on the region, unlike the rest. Rizk says that people’s say in bringing projects to life will ensure cultural relevance and quality control. “That’s the beauty of this,” she says. “If it’s a bad project, it won’t get funded; if people look at a pitch and it’s weak and they don’t believe in it, then they won’t put their money behind it. There is safety in numbers.”