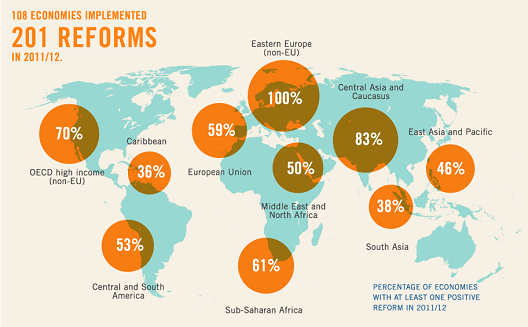 The World Bank has released their yearly Doing Business 2013 report,which assesses the regions and economies around the world where it's easiest for entrepreneurs to set up and build companies.

You can download this year's report, which assesses 185 countries, here on Wamda (and check out which countries in the Arab world topped the list, although these numbers don't always reflect realities on the ground).

This year, the World Bank also got trendy and released an infographic revealing some of the report's results, with a particular focus on women and Africa.

The infographic delves into stats related to ease of opening a business, women in the workforce, regulatory environment in specific case study countries, reforms in African business regulations, and reforms by region.

It is interesting, and disappointing, to see that only 38 out of 141 economies set equal rights for men and women in 45 key areas, yet more than half a billion women now have “brighter prospects to start a business or get a job" than they did in 2009.

In the Middle East and North Africa, only 50% of countries implemented at least one positive reform between 2011 and 2012, a higher overall rate than the Caribbean, South Asia, and the East Asia and Pacific region, but lower than Sub-Saharan Africa and the rest of the globe.

Click on the infographic below for a larger version.