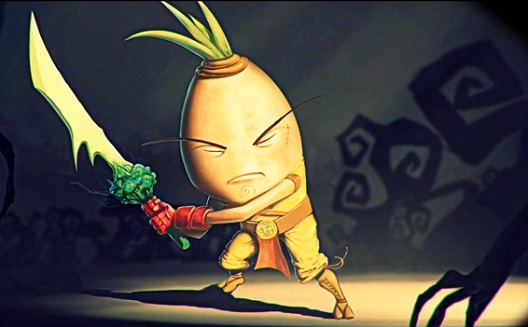 “Most people who work at gaming companies rely on the orders of their CEO, but can never be a leading part of the game they are creating,” asserts Jordanian entrepreneur Ibrahim Yasir.

Yasir quit his job at now-closed startup TakTek Games to start his own gaming studio, Team Food Fighter, with three friends in Jordan. After feeling unfulfilled by designing mobile games for others at TakTek, he decided to take the risk to start his own project in PC gaming and fund it on crowdfunding platform Indiegogo.

Inspired by classic titles Prince of Persia, Zelda and Viewtiful Joe, he and his friends built a side-scrolling game with an inspired ink and brush-stroke design that sets vegetable heroes in a dark and mysterious world. The motif seems a little goofy at first, but their design work is solid.

The story follows Fijleh, a radish warrior-monk who fights evil with his menacing broccoli sword after being awoken from 500 years of meditation. While celebrating hundreds of years of peace after destructive religious wars across their world, the characters in the game are faced with a new evil that divides the world into territories conquered by furious idols, which Fijleh must piece back together.

Despite the serious and dark motif of the trailer, there are some strange comic undertones, including the fact that after drinking too much, a peasant discharges an evil god/idol, leading to the end of the peaceful world they have come to cherish. 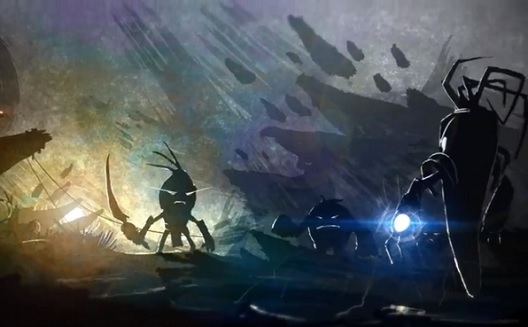 I’m a little concerned that the dark history and themes may clash with the more playful details of the narrative, but I’m sure that as the team develops the concept, we’ll see a more unified story and gameplay.

The team decided to find funding for their concept, Sanam, which means "idol" in Arabic, through an ambitious crowdfunding campaign on Indiegogo. They chose the platform because popular site Kickstarter doesn’t yet allow for projects based in the Middle East and North Africa to receive funding from bank accounts in the region, explains Yasir (and they may not have been aware of others like Aflamnah, and about-to-launch Zoomaal).

The campaign is now asking for $100,000 for the entire project’s development, promising game completion by October 2014. Donors will receive early access to the game, its soundtrack, and its digital concept art, as well as a mention in the game’s credits, even for funders who offer Sanam just $70.

While the current campaign asks for the full amount, the team has decided in the future to split the project into four smaller campaigns, which will, in turn, fund a single-player mode, more levels, a new character, and finally multiplayer modes (PvP and PvE).

It's a unique proposition; to date, we haven't seen many strong PC games developed in the Arab world, as mobile and social games seem to be the comfort zone for developers in the region. Another startup in Jordan, Beladcom, is attempting a complex Massively-Multiplayer Online Role-Playing Game (MMORPG), but they have yet to release their title.

Despite the steep obstacles before them, in an ecosystem that others have found challenging, Yasir is determined to see the project through to completion. “I risked my career so far, so I’m willing to finish this game with the other guys on the team,” he says.

Check out the trailer for the game below: