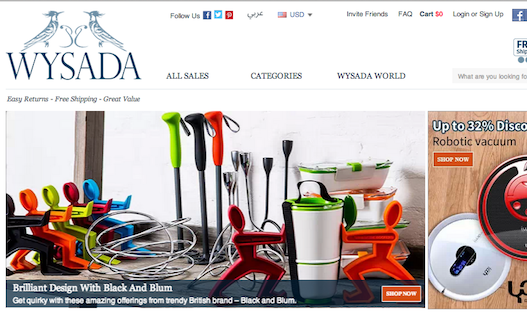 While the terms of the deal weren’t disclosed, MVI will also provide strategic support and consultancy to the flash sales site, which focuses on home goods. (Disclosure: MVI shares some of its management and investment team with Wamda Capital).

While it launched last November under heated rivalry with Desado, a similar homes goods flash sales site, Wysada has managed to build a loyal customer base, in hopes of continuing to edge out the competition. Thirty percent of its buyers are repeat customers, and 60% of its inventory are repurchases (meaning items that are purchased by repeat buyers). In lay speak, that means the majority of its inventory is going to returning customers.

Now, Wysada will be using the investment to acquire more loyal customers, says CEO Mohammad Musleh. It also has a low return rate, at 4%, which it hopes to maintain or improve on by expanding warehousing from Dubai to Jordan and Saudi Arabia as well, and managing its own last mile delivery (as every e-commerce site hopes to do).

Focusing on loyalty, which eludes daily deals sites, is crucial; it’s what drives growth in flash sales. Or so say the founders of One King’s Lane, the popular U.S.-based home goods flash sales site that debuted the model in the U.S. in 2008. Since then, OKL has raised over $110 million and grown to 6 million users. Seventy-five percent of its purchases are now made by repeat customers, founder Doug Mack revealed in January this year.

Wysada isn't far from following those same trends. It's not rocket science, but building loyalty requires quality. Here’s what Wysada is planning.

It’s still early days in the home goods sector, and the struggles of e-commerce companies are well-known (name one that has been able to enter the Saudi market easily). But by focusing on the customer at all costs, Wysada may have a chance at building what a flash sales site might need most of all- a soul.