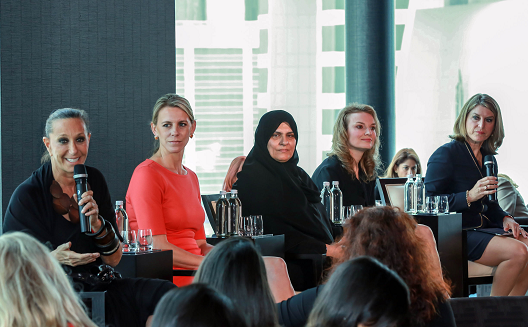 Women’s entrepreneurship is all the rage lately. Mentions of women in the global media have risen from a catatonic 200 times a year to 1200 times in 2012, HBR pointed out yesterday. Is it simply a passing fad?, the author asked.

In the Middle East and North Africa, as I wrote last month, it's not just hype; women’s entrepreneurship is poised for a major transition. Yes, there’s been a bit of excitement around the topic lately. But the hype still masks the fact that most stories of successful businesswomen in the region have not been well-told (something we're working on with our new series on women).

Female founders are still in short supply, however. While it's been reported here and there lately that over one-third of all business in the Middle East are led by women, a statistic that approaches the global average of 37%, that statistic originally comes from data on a very specific population of tech entrepreneurs at Oasis500 in Jordan, and likely does not represent the Arab world on the whole.

Yet, more and more women will be coming on board as entrepreneurs in the next decade; more women in the Middle East intend to start new businesses, relative to men, than in any other region in the world, according to this year’s Global Entrepreneurship Monitor report.

A second tidbit that the report reveals (which we initially glossed over), is that, while women aren’t necessarily more innovative than men across the globe, they are in the Middle East. Twenty-three percent of women entrepreneurs in this region have an innovative product or service, as compared to 18% of men.

So, in the Arab world, women founders might just create more innovative companies.

It might be counterproductive to make too much of that statistic, for a few reasons that I’ve argued (there’s no evidence of its statistical significance, this data comes from a subset of countries in the Arab world, not to mention that qualities like innovation are by no means innate), but the trend points to a reality that VCs in the region typically confirm: all other things equal, investing in a woman can be a lower risk proposition, because women just, well work harder. We get obsessed. We have something to prove.

One survey of U.S. companies also found that the successful companies had twice the number of women on the founding team.

Of course, women in the Middle East are still up against several negative stereotypes (as women at our Wamda for Women roundtables in Cairo, Doha, Amman, and Riyadh avidly discussed).

But for the women founders collectively seeking US $63 billion to $77 billion in funding across the Middle East, the above might be good statistics to share in a pitch, if an investor seems unconvinced that he or she can trust a female founder. But only after revealing that innovative product.