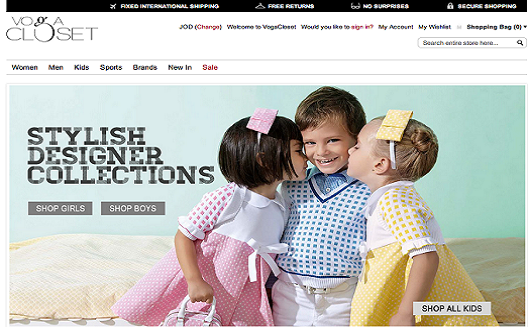 Needless to say, online payment is a serious issue for e-commerce websites in the region. Even though we hear a lot about new partnerships between e-commerce websites and payment gateways, trust in online payment can be scarce. Some websites have addressed the issue by offering cash-on -delivery (COD), but many others hope to lead the way in getting the ecosystem to abandon COD, as it often comes with high return rates, and high risks.

Voga Closet is one such e-commerce platform, a new fashion site launched out of the UK. After working on the platform for nine months, Nadia and Khaled Husseini, a brother and sister team who previously launched video explanation platform ishra7, released the beta version of Voga Closet in mid-July, to feature clothing, shoes, accessories, electronics and sportswear for women, men and kids.

After taking on investment from family and friends, the startup has now grown to 15 employees, along with a few freelancers and part-timers. It's already operating in the UAE, Kuwait, Qatar, Jordan and largely focusing on Saudi Arabia. Both siblings insist that they hope not to use COD. Yet as it grows, without COD, which is requested on 80% of e-commerce orders in the Arab region (especially in Saudi), can it scale successfully? If so, can others follow its model?

It's early days to share numbers on customers, but the founders revealed that when it comes to payment, they believe that credit card holders are more likely to return to make further purchases.

Those who will share their card information online are “easier to convert [to regular customers],” says Khaled.

The platform offers PayPal, CashU and OneCard, which is one way of differentiating itself. “We position ourselves for credit card holders,” he explains. "We are not trying to be everything for everyone.” To encourage online payment, Voga Closet is partnering with Ahli Bank in Jordan to offer cardholders free shipping.

Voga Closet isn’t the only e-commerce site that has tried this approach. Back before daily deals site GoNabit was acquired by LivingSocial, (during the time when I worked there), the website initially did not offer COD, because it wanted to encourage online payment. As it scaled and entered Egypt, however, the company eventually had to offer COD.

Will Voga Closet face the same destiny? “We might look at COD by market and for a specific time,” Khaled says.

Another natural challenge the startup is facing down is shipping. With a warehouse abroad, and goods coming in from the U.K., Voga Closet ships almost exclusively from the U.K., using Aramex.

As a young startup, this is a common tactic; as the company scales, it may be able to warehouse locally, to cut down on shipping costs.  Of course many of the other sites that have launched their own last-mile logistics have also taken on tens of millions in funding.

But for Voga Closet, warehousing in the UK proved to be cost-efficient for them, according to Khaled, as their warehouse is “relatively small” and not all of their products are stored there. “We don’t have [some of the products] in our warehouse,” he explained, and they are shipped “directly from the supplier, so we don’t need a space for it.”

Of course, if it sounds a little too good to be true across the Middle East, it is; it's not without add-on fees for customs and logistics. Voga Closet adds extra for customs, which varies from shipment to shipment and country to country; in Jordan, buyers pay customs if their order exceeds 100 JOD.

Yet Voga is clear about this; totals on the site include the cost upfront. “If you go to our CheckOut page we have a built in ‘Customs Calculator’ by country which is linked to a certain Customs rate,” Khaled said, “they can either "Pay Now" or "Pay Later" and if they choose to "Pay Later" and their items get charged customs they assume those expenses.”

Overall, Voga Closet's current challenges are reminiscent of Cazamoda, another online fashion e-commerce site that recently launched, also received support from family and friends, and also doesn't offer COD, because, its founder says, it wants to avoid logistical issues at the beginning.

Not offering COD may help evolve the e-commerce ecosystem, as major players pointed out at a recent PayPal roundtable, after the release of its Insights E-commerce report.  It might limit the number of shoppers Voga Closet can bring on in the very beginning, but, as Voga and other smaller companies decide COD isn't worth it, they may set a new precedent, and bravely work towards alleviating one of the region's biggest challenges.