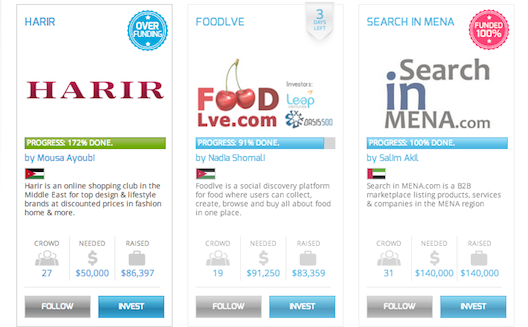 Will 2014 be the year of crowd investment? Yes, if startups like SearchinMENA have anything to say about it. The B2B marketplace, founded by Syrian entrepreneur Salim Akil, has just raised $140,000 USD, the largest round yet to be secured through Eureeca, the region’s crowd investment platform.

Now, Akil is considering the launch of another campaign, to capitalize on his momentum and raise part of the next $400,000 USD he’ll need to build the platform into the AliBaba of the Middle East (Akil recently secured a meeting with AliBaba that he says “went very well”). If he can succeed, persuading friends, family, and investors he’s never met to continue investing, SearchinMENA.com will become the largest of a new set of startups proving the viability of crowd investment in the Middle East.

A year ago, when crowd investment first emerged in the Arab world, buoyed by its support in the US, the concept seemed controversial. Would potential angel investors understand the risk? Would startups benefit from giving equity away to a group of strangers? Would crowd investment survive government regulation? Questions swirled about the concept’s potential efficacy.

Today, thanks to the success of SearchinMENA, Jordan’s Harir.com, Dubai-based startup Nabbesh, and Jordan’s Foodlve hitting 91%, Eureeca is becoming a go-to quick solution for startups hoping to bridge the gap until they can secure institutional investment.

Nabbesh, a skills exchange community led by Loulou Khazen and Rima Al-Sheikh, used the platform mostly for exposure and buzz, reaching its modest goal of $100,000 USD within 12 days, while also raising money from institutional investors. Harir.com, a design and home goods flash sales site, raised $50,000 USD in 8 days. The Eureeca campaign was “mostly just to get exposure and to get the funds to get us to the next stage,” says founder Mousa Ayoubi.

For these startups, it could seem like easy money, as typically, investors are silent, meaning they aren’t represented by a board seat and don’t have direct input into company decisions (although each startup can design a different model on Eureeca). This seems to be a bargain that angel investors are ready to make in exchange for the privilege of getting into the startup arena.

Yet quick success isn’t a guarantee. Raising $50,000 USD on the platform might not be rocket science, but Eureeca has a distinct formula for success. Flout the rules, and you may find it difficult to raise even the smallest amount. But learn the game, and you might gain access to investors from around the globe eager to find new opportunities.

A look at the three campaigns reveals what it takes to raise money on Eureeca:

1. Have an extensive personal network of potential investors.

If you don’t already have a network of potential funders to reach out to, you might as well not launch a crowd investment campaign.

Eureeca’s team members are the first to admit that preparation is essential for success on the platform. And, as it turns out, success is all about framing. If you appear to have momentum, that momentum will grow. So it’s essential to secure the first difficult, “early adopter” investments from an immediate network of friends and family.

“We advise SMEs and entrepreneurs to not expect to launch on Eureeca and [have] investment to start flooding in,” says Sam Quawasmi, Eureeca’s cofounder and managing director. “You have to tap into the first and second levels of your own network of friends, family, and clients, who will typically form 30-40% of your funding target.”

It’s only then that a startup starts to look attractive to unrelated investors, he explains. “It’s like looking at two restaurants, one that’s decent-looking and packed with people, or one that’s beautiful but empty. Which one will you go for? The one that’s busy.”

Akil affirms this reality. “The overwhelming majority of the investment came from friends, and friends of family,” he says, estimating that 26% of his investors were friends, 26% were friends of friends or friends of family, 41% were investors who found out about SearchinMENA online, and 6% were clients. A full 35% were from the UAE, and 35% from Saudi Arabia, and 38% total were of Syrian nationality, and thus part of Akil’s extended network.

What's important for startups to keep in mind is that they should be prepared for investors from outside their personal networks- while there may be more of them- to give smaller amounts. The maximum individual investment SearchinMENA received was $40,000 USD, with a minimum of $100, and an average of $4,300 USD, indicating few large tickets.

Lest entrepreneurs discount the effect of Eureeca on hitting that first milestone, however, Akil notes that Eureeca played a crucial role, by making the campaign visible and building trust. “It helped me convince my friends to invest, by creating a good structure,” he says.

Because overfunded campaigns can continue raising capital, there’s little downside to choosing a small amount on Eureeca. Yet if a startup chooses an amount that’s too large, it risks not meeting its goal and receiving nothing. This asymmetrical setup means that startups should aim low, even if it could look unambitious to run a campaign for $50,000 or $100,000 USD during a scaling phase.

The more startups can guarantee that they’ll reach their target, by speaking to at least some investors ahead of time, as Nabbesh did, the better their chance of success.

Raising money, no matter how you do it, requires a large PR campaign.

“Talk to anybody and everybody,” says Akil, “because those people will start talking and will talk to others.” Successful crowdfunders on platforms like Zoomaal, Kickstarter, and Indiegogo attest to the same philosophy.

Akil also advises entrepreneurs to focus on social media. In general, “a lot of people were interested [in investing] around $5,000 USD, and we attracted them through social media,” he relays.

Although this tactic is crucial from the beginning, it’s especially relevant at later stages. After hitting the 60-70% threshold, Quawasmi says, startups might begin attracting investors from other countries and even other continents. SearchinMENA, he points out, attracted investors from Brazil, Germany, and India in its final stages (and its campaign was extended for a month because Akil was in talks with those investors, he says).

Harir.com is also still finding investors inquiring about the platform, especially from Saudi and the UAE, says Ayoubi. Once it closes the campaign, it will look to spend the capital on “customer acquisition, working capital, and enlarging our team.”

The future of crowd investment

Given these initial successes, Eureeca is set to grow dramatically this year, as accelerator graduates and other early stage startups look for ways to keep growing steadily in the absence of immediate VC interest.

The only threats to its platform are the risks of regulation, or a potential deal gone bad. To minimize that risk, Eureeca conducts due diligence and background checks on each investor who funds a proposal, so that “when a proposal is funded, both parties would have passed the due diligence and KYC checks.”

Although regulators may decide to step in and limit its activities, Eureeca, which is registered offshore, is continually in talks to encourage regulation of the sector, says Quawasmi. The hope is that regulators will see the value in the vehicle. “We are creating jobs,” he points out. “90% of hires happen after someone gets funded.”