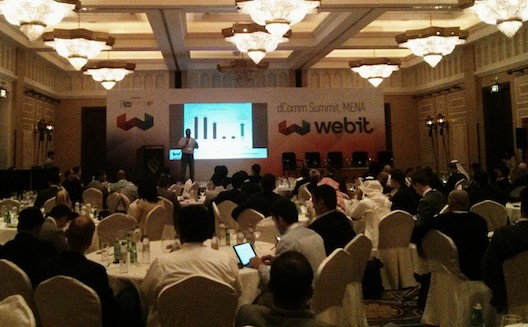 On April 30, Webit Digital hosted a commerce summit that gathered prominent speakers and attendees in the field of e-commerce.

The speakers represented different sectors in the industry, and discussed current issues such as statistics and expectations regarding e-commerce market, online payment solutions, and e-commerce channels especially mobiles.

A report by PayPal published last year concluded that the e-commerce market in the Middle East grew from $7 billion USD in 2011 to 9 billion in 2012, and is set to reach 15 billion by 2015. One reason behind this is that a big segment of the population have begun to use e-commerce, and more merchants are launching websites to offer products that were not available in the region.

The growth of e-commerce went in parallel with an increase of smartphone usage in the region. Basma Al Jaberi, the e-commerce specialist at the Telecommunications Regulatory Authority in UAE, explained that 36% of online purchases are done via mobile and 39% of Emiratis own at least one smartphone, 44% have two, and 10% have three.

The speakers agreed that e-commerce in the region still faces many challenges, but some factors can help overcome them.

Government legislation promoting e-commerce: Bankruptcy laws remain almost absent in the region and the cost of legally establishing a startup is still expensive. Khaldoun Tabaza, the founder of iMENA Holdings, cited high costs of shipping and importing products, most of which are manufactured abroad, in addition to the costs of logistic services, customs, and taxes, as making e-commerce a very “tough and costly” sector. “E-commerce is not very profitable even in Turkey where they manufacture all their products, so imagine the situation in the Middle East and North Africa,” he added.

Mohammad Ghashem, the founder and CEO of ShopGo, suggested the idea of an e-shop for providers and merchants enabling them to buy goods directly from manufacturers; an alternative to importing and all what it entails.

Online payment solutions. The biggest problem facing e-commerce in the Arab region remains the reliance on cash on delivery. Fouad Jreis, the co-founder of CashBasha and Bitcoin Jordan, believes that paying with cash “won’t disappear soon” because we live in a society that considers paying with cash a part of its culture: 90% of transactions in GCC countries, 95% in Egypt, and 98.1% in Saudi Arabia are cash transactions, according to a report published by McKinsey.

But Moe Levin, Bitpay’s manager, thinks that the electronic currency Bitcoin may be an ideal online payment method, due to the fact that it can be used as a digital accounts book, allowing users to track transactions.

Hyper Pay offers another new service for the online payment, one that integrates the Pay-on method from Germany with e-commerce in a way that suits the region especially with merchants and travel agencies. Alaadine Al Majed, payments officer for Hyper Pay, said that this service will revolutionize online payment gateways for many reasons: it’s easy, quick, offers protection from fraud and flexible options, and operates independently of geographical boundaries.

The absence (for now) of an e-commerce community. Mostafa Mahmoud, founder and CEO of MENA Commerce (a startup providing training and consultancy in the field of e-commerce), said that more than 1,000 e-commerce websites are available in the UAE, but 97% are not operational. The reason for this, according to Mahmoud, is a lack of awareness, knowledge, and experience in the mundane aspects of launching an e-commerce site.

That’s why he considered it necessary to “build a strong community for the e-commerce sector,” complete with training sessions, workshops, and master classes.

There’s no doubt that other factors play a major role in promoting or improving e-commerce in the region, such as granting small medium-sized businesses loan with low interest rates and promoting venture capital. But based on the discussion at Webit, these three are the place to start.