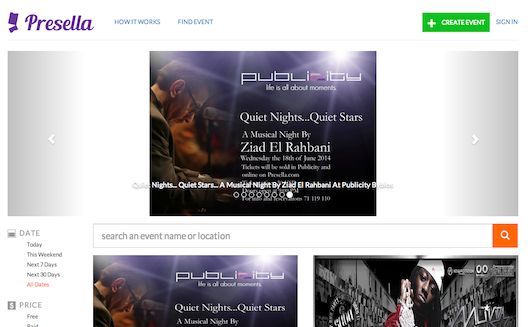 Inaugurating the Circular 331 initiative, passed by Lebanon’s Central Bank last August as an attempt to make it less risky for banks to invest in startups, Al-Mawarid Bank has announced an investment in Presella, an e-ticketing platform that aims to ease the process of organizing an event.

As we reported last year when the scheme was announced, through the initiative, the Central Bank of Lebanon (BDL) gives banks investing in startups a seven-year interest-free credit, which can be invested in treasury bonds with an interest rate of 7%. Further, the BDL guarantees up to 75% of the value of the investment, meaning that the bank only risks losing 25% of any investment in a startup.

According to a series of emails from co-founder Walid Singer, Presella’s round, which totals $300,000 USD, comprises $200,0000 from Al-Mawarid Bank, and an additional $100,000 from Beirut Angels (an investment collective headed by former Telecom Minister Nicolas Sehnaoui), as well as individual angels Hala Fadel and Presella co-founder Louay Al-Kadri.

Presella “is not disclosing equity” the company gave up in exchange for the investment at this time, but Singer said that the “founders will retain majority control for the company, in the true essence of any startups’ enthusiasm.”

The team plans to use the money, says Singer, to “hire more talent, expand into the UAE and test the European market, get the platform out of beta and into full feature release, and release the first mobile app for event ticketing, communication, and management.”

These are objectives that have been in the works for a while; perhaps this latest cash injection will see them through.

Issues often arise when traditional financial entities get involved in startups; in the August 2013 interview with Wamda, Vice Governor Saad Al-Andary of the BDL said that they were taking steps to synchronize the two worlds. “Specialized units familiar with startups will be created at the banks to follow up closely” with the investment, said the VP.

Indeed, Singer seems confident that the deal with run smoothly as it gets fully underway. He said he has “no concerns at all… when we first met [Minister] Marwan [Kheireddine, the Chairman-General Manager of Al-Mawarid] and saw how tech and entrepreneurship savvy he was, we knew we would have a good partner.” Further, Singer continued, “Minister Marwan has great experience in the event and retail industry… we think he will provide us with much more than financial support.”

This is a coup for the Lebanese startup, which has been going strong since its launch a year and a half ago despite various complaints from users, including slow or no delivery of confirmation emails, and no record of a ticket purchased upon arrival at a venue. Singer says these were normal technical difficulties, “like those experienced by any startup.”

“Our customer service is fast and we usually resolve issues in less than 24 hours,” he says, a claim backed up by my own personal experience emailing customer service when I didn’t receive a confirmation email. Things are set to improve, Singer says, with the latest version, released a few weeks ago, with which “there have been 0 problems.” This latest version represents a small part of the full feature release, which Singer says he hopes this investment will facilitate.

“We are thrilled to be the first startup in the region to benefit from this circular, but we have a big responsibility now, not just towards Presella, but for the entire scene. Our success can hopefully motivate as many entrepreneurs as possible,” Singer says.