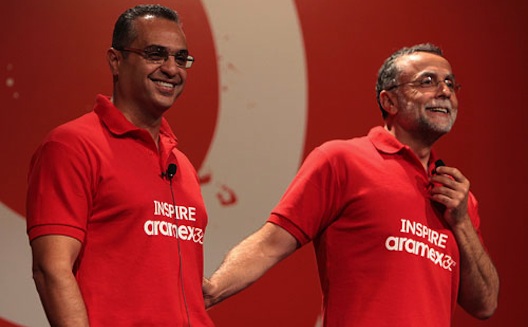 In a move that surprised many yesterday at Aramex's annual conference in Dubai, Fadi Ghandour has announced that he is stepping down as CEO of the global logistics company by the end of this year.

While many at the event were emotional over the news, entrepreneurs throughout the Arab World have not lost a leader; the move will allow Ghandour (who we'll refer as "Fadi" in this article to reflect his first-name basis with many entrepreneurs) to further focus on the company's strategy as well as initiatives that he pointed out are close to his heart: sustainability and entrepreneurship. He'll also continue to serve as Chairman of our Board on Wamda.

"I will be continuing to do what I love most: mentoring, coaching, investing and supporting entrepreneurs and entrepreneurship in the Arab world. When supported with a holistic view that fosters social impact as well as financial growth, entrepreneurship is the ultimate tool for empowering societies, communities and individuals," Fadi told Wamda.

As Fadi's leading role shaping the evolution of the entrepreneurship ecosystem continues to evolve, his voice will remain a force advocating entrepreneurs, championing honesty and hard work while encouraging governments to support growth. Perhaps no other angel investor is as well-known, prolific, and accessible on an individual level; you can't throw a stick far in Jordan (or the region for that matter) without touching an entrepreneur that has benefitted from his advice, which typically urges humility, listening skills, and a long-term view focusing on learning (among other tips set forth in his inspiring speech at Arabnet 2010).

As the ecosystem evolves, it will likely be able to distribute more of the investment burden from the few angels, including Fadi, to the many. Yet Fadi's thought leadership remains unique. We at Wamda will continue to publish his straight-shooting advice, gleaned from his 30+ years of tenure as CEO, during which he lead Aramex from a fledgling logistics company started in Jordan in 1982 to a global powerhouse earning revenues of over 700 million in 2011, operating in 60 countries, with recent entrance into South Africa and China.

He set a precedent with Aramex, fostering a sense of individual initiative at the company, while promoting the importance of social entrepreneurship with community empowerment organization Ruwwad. As Fadi continues to serve as the Vice Chairman of Aramex's Board of Directors, he will leave in his place Hussein Hachem, who has worked for Aramex for 20 years and currently serves as the CEO of the Middle East and Africa.

In a statement at the Aramex conference, Fadi said:

“I have always maintained that the best part of building a company is to build it for and with others, to make it a platform for collective ambition and innovation. Looking at you and the team that has been helping me make Aramex the fantastic place it is today, I know that I have fulfilled my promise and that the day-to-day running of the company, under the leadership of Hussein Hachem, is in very capable hands.”