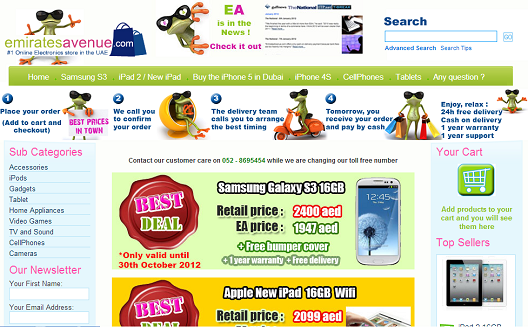 Unlike many of the interviews I've done lately with entrepreneurs who are very aware of their own spin, chatting with Julien Pascual of Emirates Avenue was refreshing.

He's simply very laid back about his approach to Emirates Avenue, an electronics e-commerce site that he launched in Dubai in 2009; he wasn't speaking in marketing soundbites or trying to convince me that Emirates Avenue is the best thing since sliced bread.

Yet when asked how the company differentiates itself from competitors, Pascual says very candidly, “We make money.”

By keeping a small team, and aiming for fair prices and on-time delivery, the site is making money with a model that works, seemingly without ambitions to scale.

They deliver smartphones, iPads and other Apple products to their customers within the UAE in less than 24 hours, offering payments exclusively via Cash on Delivery (COD). They are only just beginning to accept credit card payments this month.

Pascual came up with the original idea for the startup while on a trip to Dubai. "I came to visit my wife here and I looked online to buy a phone and I couldn’t find anything,” he explains, “so I said, ok, let’s build something.”

When they first started, Emirates Avenue was the only electronics e-retailer in Dubai, Pascual explains. Now he says there are over 35 different sites doing the same thing.

Their website, which looks like something out of the late 90’s, is colorful but extremely basic (maybe even slightly tacky), but it gets the information across, showing you exactly what you are likely to be looking for. Perhaps this template exists for a reason, the menu bar simply lists their most popular five products instead of categories. Regarding the site's bright design, Pascual interestingly notes, "When we introduced our frog mascot, orders increased by 20%. People must have felt more reassured by the fact that a company with a mascot must be trustworthy."

The site also occasionally offers flash sales whenever retailers offer them good deals; they don’t have a set schedule.

This approach suits Pascual's laissez-faire attitude; when asked if Emirates Avenue has aspirations to expand or grow in the region, he confidently says, “No. We had a few tests, but the problem is that regulations are very different in the countries around us.”

When asked about the number of users they have, Pascual said honestly, “we don’t really track them or focus on them.” He says that the competition is too obsessed with keeping track of and signing up more users. Emirates Avenue simply doesn’t find it as useful.

Frankly, this is bad business practice as an e-commerce startup, so it's unclear whether Emirates Avenue doesn't want to talk about its users. At some point they likely collect at least some information to make sales projections and choose which products to feature on the menu bar. Perhaps Pascual is focusing on another day job, but Emirates Avenue is definitely following the approach, "If it's not broken, don't fix it," letting a functional model continue without much iteration.

Though there are several electronics e-commerce platforms in the UAE, Pascual explains that only about two or three actually make money, one of which is Emirates Avenue. “We don’t base our prices on competition … we base them on the market price,” adding that sometimes they don’t have the cheapest prices, but customers still remain loyal.

One of their major competitors, JadoPado, started in 2011, has been expanding its business since its launch, receiving a boost from the closure of Mizado earlier this year. Their extremely fast delivery and sleek user interface are making them a rising player in the space. But Pascual insists that he hasn't seen a decrease in business since JadoPado opened.

He explains that he doesn’t have any animosity towards any of his competitors and there is plenty of space in the market for them to coexist. Adding that, similar to their remaining competition, the only time Emirates Avenue felt a flux in business is when Mizado and Nahel closed, increasing their market share and driving new customers to their site.

He offers a lesson he learned from the failure of Mizado, “I think they spent a lot of money very fast, they were focused on the long term,” he explains. “When you have so much money to start and you spend it all, it is very difficult to get it back.”

Many consumers are frustrated over Mizado’s failure, he adds. “They closed, and the people are stuck with their phone or device, with no warranty. It’s difficult for people when you spend $3-4,000 and suddenly you lose your warranty, but people feel safe with us.”

It seems that customer loyalty due to consistency is the startup's biggest asset. And in today's aggressive startup market, where many startups struggle to get off the ground, it's a curious case. It seems that either their laissez-faire approach masks a deeper competitiveness, or the market simply isn't saturated enough that a first mover has to work hard to maintain market share.

Either demand in the market exceeds supply, or Pascual is simply happy to keep the company profitable without expanding beyond is team of four; perhaps scaling to Saudi Arabia isn't worth the cost in the near term.

For electronics customers, many of whom may have been first-time online buyers when they came to Emirates Avenue, simplicity and reliability can be more important than a stylish interface or quick expansion. If there's a lesson to be learned from their example, it's that e-commerce companies that offer a product in demand, focus on reliable delivery, and offer COD have a good chance of success.