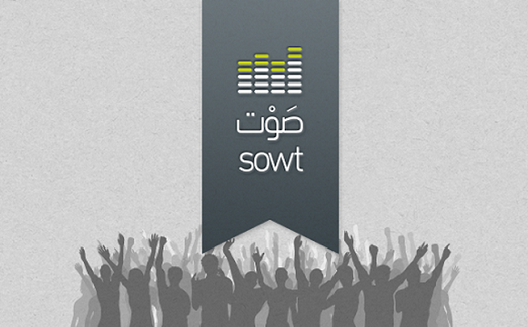 Sowt could be called Twitter for audiophiles. As a social network based upon short voice recordings, this Jordan-based platform (whose name means “voice”) might just be the next platform to empower citizen activism in the Middle East.

“Voice is the most common and most effective form of human communication, yet it has never truly been integrated into social networking,” says MIT graduate Hazem Zureiqat, Sowt’s soft-spoken co-founder and CEO, a veteran of Jordan’s tech scene. The platform draws from the structures of Twitter or Vine, allowing users to upload audio recordings no longer than 42 seconds, along with 100 characters of text, which can be “echoed,” Sowt’s version of re-tweeting. The length of 42 seconds was chosen as a duration shorter than a minute that’s also “the ‘Answer to the Ultimate Question of Life, the Universe, and Everything’ in The Hitchhiker's Guide to the Galaxy,” says Zureiqat.

Like Twitter, Soundcloud, and competitors Audioboo and Bubbly, Sowt offers users asynchronous follow, or the ability to follow others without creating a mutual connection, and it allows users to engage in discussions by commenting on audio posts via voice and text.

Different from Twitter and SoundCloud, Sowt offer users the ability to create your own personalized crowdsourced radio station by enabling users to search any given topic and listen to a continuous playlist of all related audio posts.

The idea, says Zureiqat, who co-founded Sowt along with his two siblings, Tarek and Dana, is to give citizen journalists the means to have their voices and opinions heard beyond the limitations of mainstream journalism and text-based social networking channels where users can better convey their ideas and emotions and communicate better with their audience. While video might still be a more powerful medium for communicating with a larger audience, Sowt is simply an easier tool to use, says Zureiqat, as you can easily record short audio messages on your smartphone and post them on the go or stream them over Bluetooth or Apple’s AirPlay.

While the Zureiqats initially wanted to revolutionize social media in the region and compete with other audio platforms globally by incorporating voice into a social network, they’re now seeing that its uses are hardly limited to citizen journalism. “Only three months into our public launch, we already see how audio can be a very powerful tool, not only for journalists or those who want to discuss politics and current events, but also for people who want to voice their opinions on certain issues, read poetry, sing a song, or even just tell a joke,” he explains.

Recently, the platform was used to launch discussions about the turn of events in Egypt, including dialogue on sexual harassment; it was also used to document controversial questions about internet censorship at the Arab Advisors Group’s 10th Convergence Summit in Amman.

Wisely, the platform is also taking a B2B approach, introducing branded channels designed to offer celebrities and public figures, as well as organizations, companies and TV and radio stations, a platform for connecting to their fans and customers with quick music clips or voice messaging.

Can Sowt take on its global competitors?

While Sowt was founded, designed and developed in Jordan, Zureiqat is now looking to take Sowt global. “Jordan was a pilot run,” he says. The platform is already regional, attracting users from Saudi Arabia, Egypt, and North African countries, as well as a few non-Arab countries. 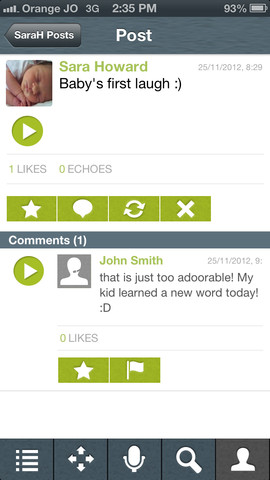 Currently available in both English and Arabic, with French and other languages coming soon, the Sowt team hopes to launch truly global conversations.

Zureiqat is also realistic about his prospects of competing with the likes of Twitter or Facebook; rather than make Sowt a separate destination, he plans to integrate heavily with both, offering users the ability to share posts across multiple platforms from the web and its iOS and Android apps.

But the key challenge when launching a social network is obviously drawing traffic. Currently, Sowt has around 20,000 users, many of which are very active and discovered the platform via word of mouth, as Sowt hasn’t launched a marketing campaign. The platform started taking off "before we even found an office and built the team”, says Zureiqat. “I only started working full-time on Sowt last month."

Yet Zureiqat doesn’t expect traffic to grow organically alone. "We have to make sure that, one, we have an aggressive marketing strategy and, two, we seamlessly integrate with Facebook, Twitter, and other services on which users are already active."

As Sowt goes global, it will have to compete with existing players AudioBoo and Bubbly, which are currently dominating the small but growing audio-based social network segment. AudioBoo, an audio-based social networking platform popular in the UK is rapidly growing, with active users quadrupling to 4.4 million and “listens” per month doubling to 8.2 million from October 2012 to March 2013, according to The Guardian, with whom AudioBoo has partnered.

AudioBoo has recently become the latest third party app to integrate with Twitter, allowing users to listen to posts directly within a Twitter stream, and it’s now in talks with US-based investors for a funding round close to GBP $10 million (US $15.5 million), following a round of GBP 2 million (~ US $3 million) in 2010.

While AudioBoo feels like a crowd-sourced audio news site, hosting content from media platforms such as the BBC, AlJazeera and The Guardian, as well as journalists, another platform, Bubbly, is serving up entertainment content.

Called “The ‘Instagram of Voice,” thanks to its various funky audio filters, Bubbly is dominating the Asian social media space with more than 15 million active users, now planning further expansion in the UK, Japan, Indonesia, and Malaysia. What sets Bubbly apart is its focus on mobile (it has no web interface) and its ability to draw users by featuring popular Asian and British celebrities.

One way that Sowt stands apart from both AudioBoo and Bubbly is that neither of the other platforms incorporate voice and text together, thus giving users the option to express themselves in both mediums. Sowt also has a more interactive and social interface than either competitor, which may help current social media users easily incorporate an audio-based platform. In the Arab world especially, with the rapid turn of events in Egypt, hearing the voices of the crowd may just offer a unique portrait of what’s going on the ground that can offer a real on the ground alternative to mainstream media.