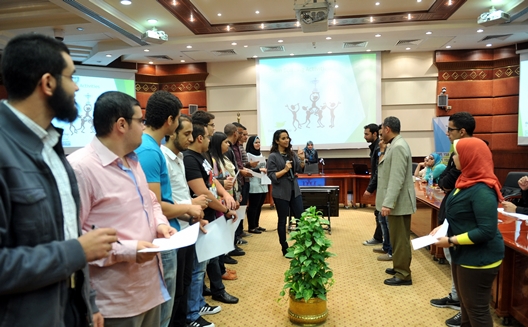 During the launch of Bedaya Startup Academy in 2015. (Image via Mahi Al Jazzar)

Owned by the General Authority For Investment (GAFI), the Bedaya Fund was launched by Bedaya’s Startup Academy and will support SMEs from various sectors, in exchange for equity.

Since November 2013 the Startup Academy has been helping entrepreneurs using a three month program that assists with essential steps like company registration, business model development, managing the marketing, financial and legal affairs, and sustainable tools for business.

In parallel with its mission to support the entrepreneurial ecosystem in Egypt it plans to launch a new partnership with a the Academy of Scientific Research and Technology (ASRT) in Cairo.

This partnership will see $800,000 raised for the development of minimum viable products, through Bedaya.

The Academy relies on several financial and nonfinancial services in its quest to help SMEs. Mentorship sessions around legal, marketing or financial consulting are among these services. "We offer these services in our 'business clinic' which aims to dissect the challenges for each project and help cofounders overcome them," Al Jazzar said.

Bedaya's fund has a financial capital is $16 million.

Investments can reach $6.3 million, with each startup needing to have a minimum valuation of $2 million in order to receive funding.

The only exception to this rule, according to the fund, is if the projects are environmental. Currently 15 percent of Bedaya's investments go to new renewable energy ventures that are implemented for the first time.

And is there an ideal time to approach Bedaya? Al Jazzar said there are no hard and fast rules and that each startup is looked at on a case-by-case basis.

"Our services might be [suitable] for the pre-founding state, or they might be suitable for the growth stage," she explained. "That depends on the needs of every venture."

Harmony between the governmental and private sectors

In 2008, the governmental direction in Egypt was focused on attracting giant projects with large funds.

With the fast-paced development of entrepreneurial tools, Bedaya shifted its focus to SMEs, regarded now as the shortest route in achieving economical balance.

"Especially in our country, and this is a new philosophy for GAFI by launching this program," says Al Jazzar.

The criteria for being accepted at Bedaya

Of course, the most important criteria for being accepted by Bedaya is to have an innovative idea that solves an existing issue in a radical manner.

Aside from the areas of tobacco, liquor and real estate, Al Jazzar said that they were open to ideas.

The program's support for ventures lasts three to five years, "after which it exits, and does so in various ways, mainly through the Nile Stock Exchange (NILEX)".

BznsBuilder was shut down after the revolution, then revived with the help of Bedaya. (Image via BznsBuilder)

BznsBuilder is a cloud-based tool that allows entrepreneurs to create investor-ready business plans and track their progress, with insights on their marketing and financial plans.

Founder of the platform Riham Abu Elinin credits Bedaya with supporting her venture, launched prior to the December revolution in Egypt. She was able to open marketing channels in both Arabic and foreign countries, before business halted due to political situation.

Abu Elinin's pause was not long though, as she was back to work after having participated in one of MIT Enterprise's events in the US, themed on making profit from technology. It is now three months since she launched again.